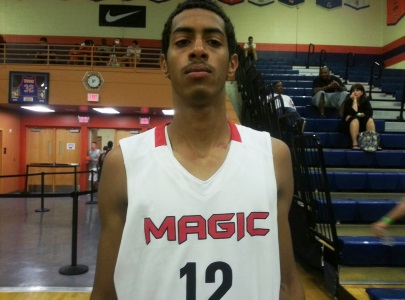 Goldwater High School 6-foot-6 senior graduate Isaac Williams is a promising wing prospect that caught my attention this spring. While his high school program has struggled to win ball games, Williams is soaring under the recruiting radar and has a chance at a future with continued hard work.
Share
Facebook Twitter LinkedIn WhatsApp Pinterest Email

One of the better unsigned prospects that I observed during the NCAA's spring evaluation period is a player that most basketball enthusiasts in the state have never seen or even heard of.  In fact, I had not seen or heard of this young man, until I saw him in action in a spring event in Las Vegas, Nevada.  While playing for his club team, the Arizona Magic Red, in this year's Double Pump Spring Classic, and being coached by Paul Hardiman, I came away very impressed with this young man's potential as a player and even as a future college prospect.

Goldwater High School's 6-foot-6 graduated senior forward Isaac Williams is a nice talent that was overshadowed all season long by a struggling basketball program at his high school.  The Goldwater high school varsity program struggled to win any ball games last season - finishing with a dismal 2-22 overall record.  As a result, very few fans flocked to catch the games that Goldwater participated in.

"I saw him during the season and he killed us," said Paul Hardiman, former Westwind Prep Academy charter school head coach.

Williams is still available this summer, as a result of a lack of attention from college programs, but he is definitely worthy of strong consideration by a local junior college program.  There is still some work needed to be done in the classroom before he will be able to move on to a four-year college program, so a junior college would be a nice fit or even a post-graduate program designed to help Williams improve his academic performance.

Williams is a long, athletic wing with a good overall skill-set as a player.  He has a very good motor and plays with excellent energy.  He almost needs to slow down at times, especially when he gets caught up in the action of the game and is capable of forcing shots.  He is a good mid-range shooter is a capable of stepping outside past the three-point arc, but needs to become more consistent from longer ranges on the floor to maximize his potential as a player.  He is an active rebounder and is capable of rebounding outside of his area.

He is a solid defender now but just needs to learn defensive principles to become a lock-down defender.  He has very good lateral quickness for his size and also excellent length to play passing lanes, combined with good court anticipation.  He is also a good shotblocker as well and should only improve in this area over time as he gains size and muscle to his thin frame.

As he matures and is coached properly he could develop into a nice wing prospect.

Williams is still mulling over his options for next fall, but this young man is one player that definitely caught my attention this spring and is worthy of some serious attention in the future.