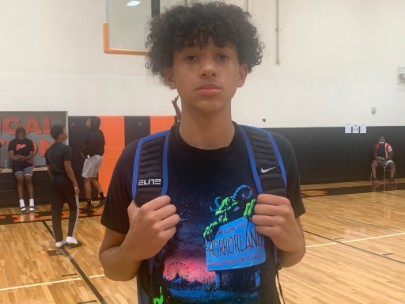 It is still early for Arizona's 2023 Class of prospects, but one prospect has already risen to the top of the class. Millennium High School's promising 6-foot-8 sophomore forward Isaac Hymes is among the elite overall talents in the class, and is a budding young prospect in the state. The younger brother of Hillcrest Prep product and University of Nevada forward KJ Hymes, Isaac Hymes is one young prospect in the state that college programs will soon be positioning themselves to recruit.

I recently saw and wrote about the promising talent of Hymes, after his strong performance in the Future Elite Summer League in June. I had not seen him play in some time, but he is progressing nicely as a college prospect and maturing into his lengthy frame. Hymes, as he indicates, is a much different prospect than his older brother. He is much more of a wing prospect that enjoys making plays off the dribble - creating scoring options for himself and his teammates. He likes to facilitate the offense with the basketball in his hands and plays with a high level of confidence in his abilities. He has a soft perimeter shooting stroke with unlimited range already, and enjoys getting his defenders off balance and unveiling his mid-range game, which is quite nice and will only continue to improve with maturity.

Hymes is a very good ball handler for his size, which allows him to play on the perimeter. He enjoys playing on the perimeter much more than he does playing on the low block, and will always enjoy that fact. Hymes has good low-post footwork and is crafty around the paint, but he likes to gravitate to the wing position, where his offensive game is much more open to breathe. He is a good rebounder for this thin frame, as he uses his length to keep balls in play and finish strong around the basket. He gets to the free-throw line quite often as a result. He is a very good passer that sees the floor - making him a very versatile prospect offensively.

Hymes is a very good shotblocker as a result of his length and activity on the floor. He keeps balls in play and ignites the offense - passing the ball to the guard and then running the floor hard for scoring opportunities. Hymes runs the floor like a guard, and competes on both ends of the floor. He also plays passing lines quite well. As he matures and grows physically, as his brother KJ did, he will begin to realize his true and serious potential as a player.

Currently, Hymes already possesses two different Division-I offers for himself from UNLV and Nevada, which is terrific for such a young prospect. Hymes will soon have a long list of offers over the next two years, and he still has (3) more years of high school basketball to play in.

As a freshman, Hymes attended Hillcrest Prep, where his brother KJ had excellent success. Recently, Isaac and his family decided to attend Millennium High School, which is just minutes from their home in the West Valley. Hymes will look to fill a major void for a strong Millennium HS program that recently lost DaRon Holmes to a transfer to Montverde Academy (FL).

"He is the hardest working and most determined young man that I’ve ever trained or been around," said father Kwame Hymes. "I’m not saying that because I’m his father, but because I’ve been around and worked with a few current young NBA players. What separates him is that he enjoys the process of the game. He enjoys the “good” and the “good” in the game - there is no bad."

The Hymes family is another amazing basketball family in the state, as KJ Hymes is set to have a big breakout season at Nevada this year, and father Kwame had an excellent basketball career of his own, after a strong career at Pepperdine University in the mid-1990's. Isaac is now the next in line, and will not only add to the lineage, but could become the best one of them all.