Ironwood Set For A Big Season, Looking To Win It All 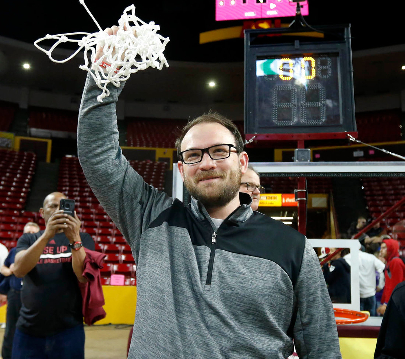 The state's 5A Division will be tough this season and very competitive, as there will be many different programs in the hunt for a 5A State Title. Ironwood High School is one of the favorites to win it all this high school season, as the program is loaded with talent and very well coached by one of the state's elite head coaches - Jordan Augustine (pictured). It was not too long ago, the sight of seeing Ironwood cut down the nets after a big Championship game performance in 2020 - defeating a loaded Millennium High School program to win it all. That championship came just as COVID would invade the United States and take over the country. Since then, Coach Augustine has worked hard to get his program back to the state's final game, and this season looks to be his best chance to win it all again.

After finishing with a 16-12 overall record last season, and losing to eventual 5A State Champion Centennial High School in two of their final (3) games of the high school season, it would sound like I might be over-hyping this year's Ironwood team, but I am not. This year's Ironwood group, while losing a few key members from last year's team, returns with a lot of experience, athleticism and depth, and is primed for a state title run this season.

This year's team will be deep, and while not very big inside, are versatile and athletic and defend. The team is well balanced, as 6-foot-5 senior forward Julius Williams is set to have a big senior season, alongside 6-foot-5 senior forward Jordan Kuac. Both prospects are two of my favorite sleeper prospects in Arizona's 2023 Class, and are worthy of serious college recruitment. The combination of Williams and Kuac make up a formidable linep and frontcourt for Ironwood this high school season, as both performers are expected to have major breakout seasons for themselves. Williams's ability to score inside and out, and rebound hard inside the paint is a nice compliment to the very long and athletic Kuac, who is an active rebounder and slasher that finishes strong at the rim and in the open floor.

6-foot-5 senior Adonis Thomas missed part of last season with an injury, but he is now back to form and will be big for Coach Augustine and his team this high school season. Thomas should also have a breakout season in his final go-around, and is another nice sleeper prospect for a college program. Thomas has excellent versatility in the front court and can defend several positions on the floor.

The Ironwood backcourt is strong as well, as the program returns nice depth in their guard play. 6-foot junior guard Noah Gifft had a nice sophomore season, and returns as a junior with valuable experience and more maturity. Gifft is a sharp shooter of the basketball and will keep defenses honest all season. The nice and valuable addition of 5-foot-11 senior point guard Leonard Romayor to this year's group will pay immediate dividends, as Romayor is coming off an excellent off-season for himself. Romayor missed some of last season due to AIA transfer rules, but he will be a full-time leader this season for this group. Romayor's quickness with the basketball and speed, as well as his ability to push the ball on the break and get the ball to the open teammate on the floor, will be critical to the success of this year's team.

Ironwood will also get excellent support from numerous other prospects that contributed last season, and will look to provide a well-balanced attack for Ironwood this high school season. This team will be deep and will play hard and fast this season - making them tough to match-up with and defend. Coach Augustine is as intense a coach as there is in the state, and his team mirrors his personality as a coach.

"This group cares deeply about being the best versions of themselves," said Augustine. "Their desire to get better every day, mixed with their depth and talent, makes them very exciting to be around."