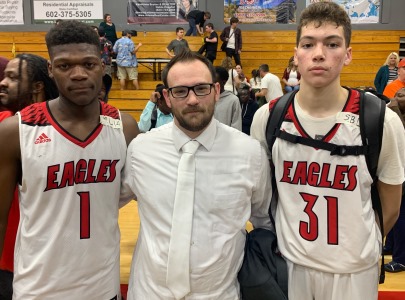 Apollo High School has been an historic program in the state for the sport of basketball.  The winning program has won many games and also won numerous state titles over the years.  From the days of Holland Woods, Shayar Lee, Tristan Wilson and Damin Lopez, the program has also produced some of the state's best talent over the the past 30 years.

This high school season, Apollo (22-3) has also been terrific - winning (22) games on the season, and also winners of their last 7 0f 8 games coming into Friday's night's exciting contest.  Apollo has also been a nemesis for Ironwood HS, and had already beaten Ironwood earlier this high school season in their only match-up of the season - a 78-65 victory by Apollo at home.

Friday evening's contest would be an important one for Ironwood (21-4), as they would look to avenge their earlier season loss to Apollo, and look to also gain 5A bragging rights heading into the post-season.  While the game already had enough motivation, the recent death this week of local basketball product, Talib Uqdah, who also was an assistant coach at Ironwood High School, gave heavy hearts to the Ironwood players and coaches.  Each of the Ironwood coaches wore white ribbons on their apparel in honor of Uqdah, which gave them added intensity for the game.

The intensity for the game was at the highest level and shared a strong resemblance to a state playoff game - a very fast-breaking style for both teams that resulted in many pass deflections, fumbling the basketball and turnovers, as a result.

Ironwood would take a 32-26 lead in the first half, and would close out the first half with a strong run that would give them extreme momentum going into the second half.  After a mid-range jumper from Apollo's talented 6-foot-5 sophomore guard Paris Woods, Ironwood would go on a nice run to close out the half.  A three-pointer by 6-foot-3 sophomore guard JJ White with 2 minutes remaining, and then an offensive rebound by hard-working post player, 6-foot-2 senior Jordan Kafoa, followed up by another three-pointer from White, and then a strong driving basket close out the first half by 6-foot-3 junior guard Dominic Gonzalez.  The barrage of baskets would give Ironwood a nice 42-32 halftime lead and the game's momentum.

In the third period, both teams would go at it - both teams looking to gain an edge on the other.  Apollo's star 6-foot-7 senior wing Emmanuel Taban would see foul trouble for much of the first half, which would delegate him to the bench for an extended period of time.  In the second half, Taban would get another early foul in the half, which would again force him to go to the bench again for much of the third period.

With Taban not on the floor, Jordan Kafoa would convert a driving layup over Apollo defenders with 3:16 left to play in the period - giving Ironwood it's biggest lead of the game, 50-36.

With Apollo struggling from the field and failing to get anything going offensively for much of the third period, Ironwood would turn up in the period to take their biggest lead of the contest.  6-foot-5 senior wing Cassius Carmichael would knock down a big three-pointer from the corner, and then convert a strong driving layup around a defender on the baseline for a reverse layup to give Ironwood a big 55-36 with 1:18 left in the period.

Ironwood would take a 57-39 lead into the final period, after a big basket from Kafoa, after he would collect a loose ball, and then make a contested shot in the lane as the buzzer sounded.

In the fourth period, Apollo would mount a serious comeback.  With Taban back on the floor and the Hawks playing with a level of desperation, they would begin a strong run of their own.  A three-pointer from Paris Woods from the corner would begin the run, and would also end a long shooting drought by Apollo.  With 2:52 left to play in the game, 6-foot-4 senior forward Tramane Lee would put-back an offensive rebound after a teammates missed free-throw attempt.  Then after two free-throws late by Taban, Apollo would get a steal on the inbounds and Taban would finish off the play with a driving layup.

The amazing run by Apollo in the fourth period would bring the Hawks back to within four points of Irownwood, 69-65, with 1:19 left to play.  But the serious intensity and energy that it would take to get back in the contest, would run out in the final minute, after Taban would earn his fifth foul of the game and foul out with just less than a minute left to play.

Ironwood would then finish it out and get the big win over rival Apollo, 75-70 - capping off a big week for Ironwood who also defeated Sunnyslope this week as well on Tuesday (47-43).

"We just wanted to come out and play hard for Talib," said Ironwood's Malik Smith after the game.

Scouting Notes: Apollo's gifted 6-foot-7 senior wing Emmanuel Taban is an obvous talent and a superb unsigned prospect for the spring.  Taban is still considering Texas Tech and Nevada, as his two top choices currently, but he could begin to open up his recruitment this spring to give himself more options.  A big-time shooter and scorer with a good overall feel for the game.  His upside is limitless, and once he gets on a serious strength and conditioning program, he will blossom.  His future is extremely bright and he would be a steal for the right level of program . . .

Ironwood 6-foot-5 senior wing Cassius Carmichael (pictured right) is a nice talent and one of the state's most underrated prospects.  A very skilled and fundamentally sound wing prospect, Carmichael has a nice ability to shoot the basketball with range, and can also create his own shot, which is a glaring attribute for a scoring wing.  He is a very long and rangy prospect with huge upside for the future.  One of the better unheralded prospects that I have seen this season.  This young man deserves some serious attention from smaller college programs now.  Over time, with maturity physically, he will definitely develop into a division-I prospect.  He would do very well with a stint in the junior college ranks to get physically stronger, and then look out . . .

Apollo's 6-foot-5 sophomore guard Paris Woods is another obvious and glaring talent with a bright future ahead of him.  The younger brother of Portland State starting and accomplished sophomore guard Holland "Boo-Boo" Woods, this younger version is super long and lengthy, and has a tremendous skill level already.  His shot selection can be questionable at times in his young career, but he will continue to blossom over the next two years, and should see high level college recruitment over time.  He currently has an offer on the table from Portland State . . .

Ironwood's 6-foot-3 senior guard Malik Smith (pictured left) is another very good sleeper prospect with a high motor and very good athleticism and physical strength.  Smith has impressed me for some time, and he is still just beginning to realize his potential as a player.  Smith is an excellent defender and rebounder for his size - a junkyard dog type.  I love this young man's approach to the game, and he will definitely help a college program with his intensity and versatility that he always brings to the court.  Another very good sleeper prospect for a smaller college program, looking for toughness and athleticism . . .

Apollo's 6-foot-5 junior guard Zeke Thompkins is absolutely a prospect on the rise.  The younger brother of former star guard Sammy Thompkins and the son of the late Gary Thompkins, Zeke has grown significantly physically over the past year and he has excellent versatility as a player - able to play and defend multiple positions on the floor.  A left-hander, Thompkins is an effective scorer off the dribble, and is also a good shooter with range.  He is a strong ball handler that enjoys playing the point position, which makes him very attractive as a prospect.  He sees the floor very well and enjoys making other players around him better.  Thompkins also has excellent upside as he has yet to grow physically into his young body.  While he was highly regarded by me as a youngster, his natural maturity has taken his promise for the future to a new level.  I will continue to follow his progress as a player and prospect closely over the next year.