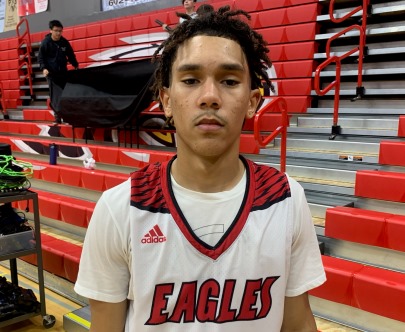 Ironwood High School (19-2) has not won a state championship in basketball in the school's long history, but this season will be the program's best chance ever to do so, as Head Coach Jordan Augustine and his terrrific staff have developed the Ironwood program into being one of the state's most consistently dominant programs. While the players are different each season, the culture is always the same, which is predicated by Augustine and his bold and intense coaching style. His players always compete at the highest level on both ends of the floor and play together, which results in success.

For West Valley rival Apollo High School (11-9) and Head Coach Jacob Marin and his staff, the message is very much the same for the Hawks, as Marin has developed a very similar culture over time. The Apollo basketball program has won a lot of games over time and also some state titles, but this season has been more of a struggle for the Hawks to gain any consistency.

Apollo came into Tuesday evening's big match-up with Ironwood as winner's of 3 of their last 4 games, while Ironwood has been one of the state's elite and hottest teams. Ironwood had won their last (8) games on the season, including a big overtime win over 5A rival Sunnyslope HS on Friday evening, 71-64.

Ironwood would come out on fire in the game's first period in an intense contest, as both teams competed at a very high level. Ironwood would take a 12-4 first quarter lead in the contest.

In the second period, a driving layup in transition by athletic 6-foot-7 senior forward Jaden Glass, and then another strong finish in the lane by 6-foot-3 senior guard Dominic Gonzalez would keep Ironwood's momentum rolling.

A strong driving layup from 6-foot-6 senior guard Zeke Thompkins would stop the bleeding for Apollo, making the score 26-19, but Ironwood's gifted senior point guard Trent Hudgens would knock down a contested three-pointer to push the Ironwood lead back to a 10-point margin with 1:18 left to play in the half.

Both teams would scrap hard to end the first half, as Ironwood would take a 30-19 halftime lead.

In the fourth period, Ironwood would turn up the intensity even more, looking to finish off Apollo. A three-pointer by Gonzalez with 5 minutes left to play would give Ironwood a comfortable 56-39 lead. With 3:21 left to play in the contest, 6-foot-5 senior forward David Teibo would make a strong post move and and finish the play after being fouled, his second basket in a row inside the paint - adding to Ironwood's big lead. As an exclamation point, Glass would finish off the big home win with a strong drving dunk around a defender.

Ironwood would cruise to another big 68-49 home win in this West Valley rivalry. While Ironwood does not yet have a state championship to their credit, this season, Ironwood will be extremely difficult to beat. They are very athletic, tough, play fast and compete hard on the glass and defensively. This team is very difficult to match-up with, and the combination of Trent Hudgens and Dominic Gonzalez may be the best one-two punch at the guard spot in the state. The 5A Division is absolutely loaded, and will be enjoyable to watch for the remainder of the season.

Recruiting Notes: Ironwood HS superb 6-foot-2 senior point guard Trent Hudgens transferred from Moon Valley HS to Ironwood HS just before the high school season, and the move was among the biggest news in the state before the high school season began. The move has really paid off dividends for Hudgens, as he has continued his terrific play again this season, but for a winning program that has a chance to win it all. Hudgens is the catalyst for a very talented group of performers, which has raised his overall play and made his production much more valuable and more immense.

I caught up with Hudgens after the game and he advised me that he is currently hearing from UMASS Lowell, UC-Riverside, Denver and New Mexico State.

Hudgens is on pace to qualify academically, which should set him up for a big spring recruitment.