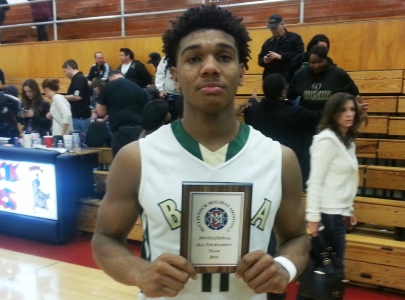 The final night of this year's McClintock Holiday Shootout would be a crazy one, filled with severe injuries to two different star player/prospects.  The gymnasium would be filled with parametics throughout the evening as two of the state's elite prospects would suffer injuries. There were also loads of fans in attendance on the evening, as two of the state's top rivals, Basha and Perry High School, would both meet up in the championship game of this year's event.

Basha High School (12-3) would finally put it all together behind head coach and former college coach Mike Grothaus - winning this year's tournament championship with a big rivalry win over Perry, 73-63.

Grothaus recently took over the head coaching position at Basha High School, and it has definitely taken him some time to transform the Basha basketball program back into a consistent contender.  Grothaus has instilled toughness and defensive intensity into a young group of players that have a lot of physical talent, but still need a lot of development.  The Basha team would mature overnight in this year's McClintock Holiday Shootout, now playing their best basketball of the season and bringing home this year's tournament championship.

This tournament championship would be one though that we will never forget.  As the first quarter came to a close, just before the end of the first period and with 1 minute on the clock, Basha HS 6-foot-10 junior post Devin Kirby would fall to the floor after attempting to make an offensive play.  Kirby would lay on the floor in absolute and sheer pain - screaming as a result of the injury.  Kirby would eventually receive assistance from a group of parametics that would indicate that he may have broken both of his legs.

With everyone in the gymnasium in absolute shock, Kirby would get wheeled outside the gymnasium and the game would eventually pick up play and advance to the second period.  Basha would hold on to a 18-11 lead after the first period.

In the second period with 2:25 left to play in the half, Perry would close the gap after a nice three-pointer in transition by 5-foot-11 star sophomore guard Markus Howard (Arizona State commit).  Another star would emerge on the evening for Basha HS though as 6-foot-3 junior guard Antwan Ross would explode on the night - the best game of his young life.  Ross would convert a three-pointer of his own from the wing to put Basha back ahead by 6 points, 33-27 with 1:27 left to play in the first half.

Antwan Ross would finish with a game-high 16 points in the first half.

Basha would hold on to a 37-28 halftime lead over Perry.  With less than a minute to play in the first half, Basha would get back-to-back baskets inside the paint from 6-foot-5 sophomore forward Gabe Mcglothan.  McGlothan is an emerging talent and a young man that I have identified as one of the top prospects in Arizona's 2017 class.  While this young prospect does not start for head coach Mike Grothaus, he is trending in that direction and will be a force to wreckon with for this team later in the season.

Another player that is trending nicely for Basha at this point in the season is 5-foot-6 freshman point guard Bryan Baptiste.  Baptiste earned major minutes in this week's event by Grothaus, and his presence would be felt in the third period of action.  After Markus Howard would drive the length of the floor for a penetrating layup, Baptiste would convert a mid-range jumper just before the third period buzzer would sound.

Perry would hold on to a narrow one-point margin at the end of the third period - 52-51.

Antwan Ross would electrify the crowd in attendance earlier in the first half with a superb and strong driving play where he would just miss a two-handed dunk over two Perry defenders.  Ross would get fouled on the play and give the fans just a glimpse of what he might be able to do on the floor.  In the fourth period, Ross would rip the basketball from Markus Howard at halfcourt after applying defendive pressure o nthe basketball.  Ross would then travel down the floor and dunk the basketball with one hand, while placing his other hand behind his head - imitating former NBA Hall of Famer Karl Malone on the play.  The dunk would give Basha a comfortable lead with 4 minutes left to play in the game.

Markus Howard would knock down a step-back, three-pointer to pull Perry within 5 points, 68-63, with 2:31 left to play.  Howard would look to get his team back within reach of Basha late, but then while dribbling up the floor and looking to score, Howard would suffer a serious injury of his own.  Howard would fall to the ground after being fouled, then bang his head on the bleachers.  The injury would cause more parametics to arrive and transport Howard outside of the gym.  Howard would suffer, what looked to be, a concussion.

After Howard's injury, in very classy fashion, Perry would dribble the ball out for the final minute of the game - refusing to make an offensive play and rather paying tribute to the hard-fought contest on the evening.  Fans would give a standing ovation at the classy move by head coach Joe Babinski and his staff.

Markus Howard would finish with a game-high 31 points in the loss, while Antwan Ross would pour in a team-high 26 points in the championship victory.  Howard, Ross and Basha's 6-foot-9 junior post Klay Stall would each be selected for the All-Tournament Team.