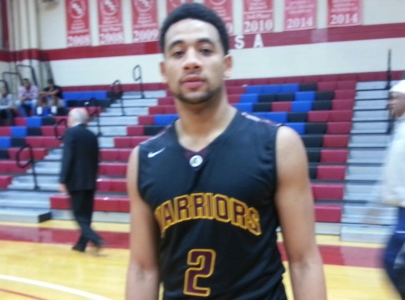 Indian Hills Junior College (IA) has been consistently rated among the nation's elite junior college basketball programs for many years now, so when they traveled to Mesa, Arizona on Wednesday evening to face host Mesa Junior College (MCC), it seemed as though the Mesa Jackrabbits would be outmatched significantly on the basketball court.

The difference though for Mesa was the coaching style and ability of long-time veteran, Arizona coaching legend Sam Ballard.   Ballard has been highly successful as a head coach at many different levels and for many years.  Ballard comes from a long line of highly successful coaches in the state, which includes former elite coaches Royce Youree and Hector "Coach B" Bejarano (my former coaches as a player).  The game preparation and discipline that Ballard and his staff provides for their players allows for their teams to remain in every game, as they take open shots, drive hard to the basket and defend like hell for 40 minutes.   They also slow the game down and force teams to play their style of play.

Mesa would then take a 28-26 lead in the game with 6 minutes left to play in the first half, afetr consecutive three-pointers from 6-foot-2 sophomore point guard Khari Holloway.  Holloway has transformed himself into a consistent point guard over the past two years, and he would come up very big for the Thunderbirds in this game.

Mesa would hold on to a narrow 42-41 lead at the half, behind a big game-high, 17 first half points from Holloway.

Holloway would continue his strong play in the second half as well, and would put Mesa ahead 65-61 with 7:31 left to play in regulation, after a long, 25-foot three-pointer.  Another runner in the lane from Holloway and MCC would jump out to a comfortable 73 to 65 lead - an 8-point advantage late in the game, but not late enough.

After a technical foul was called on the Mesa bench, Indian Hills would scratch and claw their way back into the game.  With Indian Hills head coach John Wardenburg, a former BYU assistant coach, showing excellent intensity on the sidelines and looking to get his players going, the Warriors would eventually tie the game up at 74 all with 1:05 left to play.

Andrew Jones would convert a nice three-pointer after a curl move to put Mesa ahead 77-74, but jeremiah Worthem would tie up the game at 77 apiece after his three-pointer from the wing.  Mesa would call a timeout and draw up one final play in regulation, but this time Khari Holloway would come up short on his earlier heroics - missing a three-pointer at the buzzer and allowing the game to go to overtime.

In overtime, 6-foot-5 sophomore guard Gary Williams (pictured) would finally get it going for Indian Hills, and he would collect consecutive steals - turning both Mesa turnovers into layups.  Williams attended Westwind Prep Academy in Phoenix two years ago.  After another runner in the lane by Williams, and another transition layup by Williams after another steal, Indian Hills would would seal the win - 90-83 in overtime.