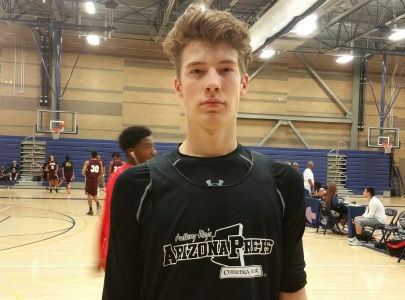 Another one of the better sleeper prospects in Arizona's very talented 2020 Class of prospects is Rancho Solano Prep's 6-foot-9, 225-pound senior post Hunter Ruck. Highly regarded as a college prospect throughout his high school career and early in the recruiting process, Ruck has yet to receive bigger scholarship offers for himself. As a result, he has turned up his performance as of late, and is coming off a big Elite Camp Most Valuable Player performance at the recent Stanford Elite Camp.

Ruck's Elite Camp MVP performance recently capped off a strong spring performance and an excellent start to his summer. Ruck has played at a high level this off-season and has raised his recruiting stock as a result. Ruck suffered an injury during his junior season, which caused him to miss numerous games during his junior season, so the opportunity to get back on the floor and prove himself really meant something to Ruck, who has raised his overall play at the right time in his high school career - during the most important spring and summer of his young life.

Currently, Ruck has several offers on the table for himself from Northern Arizona, Houston Baptist and Idaho State, but each of those offers were extended to Ruck last summer. He has yet to receive a new offer for himself this spring and now heading into the summer, but he is definitely well deserving of many more offers for himself, as Ruck is now considered as one of the better sleeper post prospects in the West.

Ruck's recent strong performance in the NCAA Section 7 Tournament in Phoenix, and also his performances throughout the month of June have improved his consideration from college programs in the West, as numerous college programs recently have contacted me about his promise as a college prospect. Ruck is well deserving of such attention, as he has been considered among the top overall prospects in the 2020 Class since entering the high school ranks. His injury during his senior season definitely slowed down his development and exposure to college coaches, but he is picking up steam now, and at the right time.

Ruck is a strong post talent with nice size and a mobile ability to run the floor, where he is a strong finisher.  He competes very hard around the paint and is not afraid to mix it up with opposing post players. In fact he relishes physical contact and has a mean streak in him, which will suit him nicely over time. Ruck is also a strong finisher at the rim, and he gets to the free-throw line quite often, especially when he is being aggressive offensively.

Ruck should now begin to command much more recruiting attention for himself throughout the remainder of July, as he continues to travel with his Powerhouse Hoops 17U team, that is very talented and will be followed by many college coaches this month. Historically, most post players with Ruck's combination of size and skillset absolutely blow up in their final summer, as these prospects are hard to find and even harder to land. Ruck is a post prospect with every opportunity for Division-I college programs to still get involved with, so I look for many more college programs to take full advantage of the opportunity, once they catch a glimpse of him and his potential for the future.

If Ruck's recent Elite Camp MVP performance at Stanford University is any indication of Ruck's potential for the future, it should be a very promising month for Ruck's continued recruitment.

Arizona Hoop Review Scouting Report:  Ruck is a nice looking post prospect with nice size and a strong ability to run the floor.  He is a good finisher in the open floor, and runs the floor hardand is a good finisher in transition. A back-to-the basket post player that has a very good jump hook and a solid shooting stroke out to 15 - 18 feet.  A good shooter from mid-range with a soft touch as well.  A good low post player with good footwork and an ability to pass very well out of the post to the open man or cutter.  He is still developing his low-post skills, and as he continues to gain confidence in his ability to score on the low block over time, he will maximize his play on the floor. An active rebounder on both ends of the floor that plays with good aggression and tenacity on the floor. Enjoys physical contact. A capable shotblocker.  A good low post defender.  Has a bright future ahead of him and the potential to become a immediate contributor at the collegiate level. The level of college program that he ultimately chooses for himself will play an important role in his success over time.