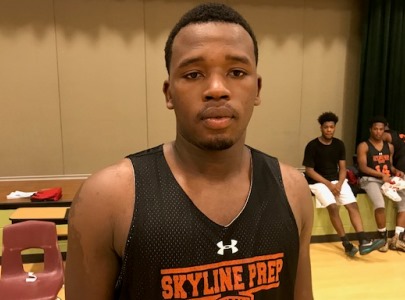 After playing for state champion Basha High School last season, and being part of a winning team, 6-foot-1, 185-pound senior point guard Amari Hudson has returned back to his former program Skyline Prep in South Phoenix for his senior season.  Hudson saw limited playing time for Basha last season, but will now look to return to form this high school season under his former head coach Jace Romero.

Hudson last competed for Skyline Prep as a sophomore, and during that season he averaged impressive numbers - 23.9 points, 9.3 rebounds, 2.2 assists and 3.2 steals per game.  He also had a high-scoring game of 55 points as a sophomore in an overtime win, one of the best performances I have seen in high school basketball in the state.

For his junior season, Hudson would transfer to Basha High School, where he would see limited playing time throughout the season, but would be a part of the state's top team in the 6A Division.  Basha would win the 6A state title last season in fine fashion, while Hudson would primarily watch from the sidelines.

He has now decided to finish his high school career at Skyline Prep, where he will look to now get back to form, and return to his high-scoring ways.  I recently watched Hudson play and was very impressed with his unique physical strength and ability to get into the lane and finish strong at the rim.  He also has a nice shooting stroke from mid-range and a strong ability to operate from mid-range around defenders - a lost art among guards today.

Hudson does have some academic issues to overcome this academic year, which will determine the level of college he eventually lands at, but he is definitely on pace to have a big senior season on the basketball court.

Arizona Hoop Review Scouting Report:  Hudson has excellent physical strength and a nice ability to get into the lane and finish strong at the rim.  He also has a nice shooting stroke from mid-range and a strong ability to operate from mid-range around defenders - a lost art among guards today.  Scoring the ball is the most impressive aspect of Hudson’s game right now, as he can do it with the best of them - pouring in 55 points in a home win as a sophomore.  He can score from all three levels, but is really at his best from the mid-range, as he is most comfortable and efficient from 18 feet and in.  He uses a great variety of step-backs and creates separation very well from defenders, in order for him to score so well.  Hudson also can use his Marcus Smart-like frame to bully defenders while in the lane.  He also uses a crafty, in-and-out handle to get by defenders with ease.  While consistent 3-point shooting is currently a work in progress for him, he can still knock down the open 3-pointer, and also hit some off of the bounce at a decent clip.  A native of Chicago, Hudson also brings fire and that wanted toughness on the defensive end.  He is very active with his hands, which leads to multiple steals and creates fast breaks and points for himself and teammates.  He is also laterally quick and is able to cut off players and defer them from where they want to go on the court.  A solid all-around guard prospect that has matured nicely over the past two years.