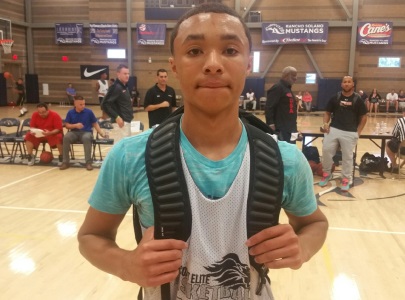 On day two of this year's McClintock Holiday Shootout, the day and the performance of the event would belong to Shadow Mountain High School (14-0) and 6-foot-2 sophomore guard Jaelen House.  House would explode for a big scoring performance as his team would aboslutely route a gifted and well coached Mountain Pointe team, 96-46, in the second round of this year's event.

In the game, House would score 14 of his team's first 16 points, as he would score from anywhere on the floor.  House was on cruise control and displaying a level of confidence on the floor, that we have not seen since Jerryd Bayless (NBA-Philadelphia 76ers) graced the Arizona hardwood.  House would ignite his team to a quick 16-4 start to the game.

Shadow Mountain would take a 27 to 12 lead after the first period, but would jump out to a huge 54-21 lead, a 33-points advantage by halftime. House would finish with 21 points at halftime and not look back, as his stellar backcourt teammates, 6-foot-3 senior guard Marcus Shaver (UC-Santa Barbara signee) and sophomore guard Jovan Blacksher, would also look unstoppable in the contest.

Shadow Mountain has been the favorite to win this year's event from the start, and they will face a surging Chandler team on Wednesday evening in the tournament's semi-finals.

Chandler (5-8) has struggled this season at times, but they are playing their best basketball of the season under head coach Ed Gibson.  Gibson led his ballclub to a big 47-46 quarterfinal win over Mesa HS on Tuesday evening, behind a game-high 15 points from 5-foot-9 senior guard Brandon Thompson and 10 points from 6-foot-6 junior wing Tevian Jones.

Chandler and Shadow Mountain will now face each other in a very exciting, fast-paced game on Wednesday evening @ 8:30PM.