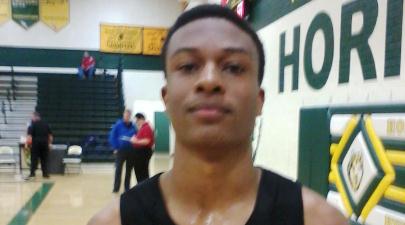 The first game in day two of the Horizon Tournament had Arcadia (5-9) matching up with Fountain Hills (2-6).  With each team coming off of a loss, this was expected to be a show of desperate teams.

Fountain Hills came out in a full-court press. This forced Arcadia to turn the ball over and Fountain Hills did what they do best, scoring off of these turnovers.  A 10-0 Falcons run helped give them some confidence.

Arcadia finally got their first bucket at the 3-minute mark.  However, from there they turned it on, scoring 11-straight, including a Calvin Outlaw buzzer-beater to give them an 11-10 lead after one period.  Both teams had big runs in the quarter; however whichever team could show some consistency would be in good shape.

Fountain Hills came out in the second quarter with energy - getting fast break points and forcing Arcadia out of their offense. Arcadia relied on the 3-ball in the first half.  Since the shots weren’t falling, it hurt their chances, as they headed into halftime down 28-19.

Fountain Hills' 6-foot junior guard Christian Wachs led all scorers with 12 points at the half.  6-foot-3 senior guard Matt Fisher also contributed 8 points for Fountain Hills.  Off the bench, Arcadia's 6-foot senior guard Trent Wilson provided some energy, collecting 8 rebounds and scoring a basket.  Arcadia HS 6-foot-1 junior guard Calvin Outlaw once again had 6 points in the first half - just like in their opening game against Marcos De Niza.  For Arcadia to stand a chance, he would have to carry them in the second half, like he did against the Padres.

The third quarter began and Calvin Outlaw came with a vengeance - fueling a 9-0 run by Arcadia to tie the game and force a Fountain Hills' timeout.  The timeout meant nothing to Outlaw, as he continued to lead the Titans into a huge 17-0 run - giving the Titans a 36-28 lead.

Finally, Fountain Hills was able to score a bucket and end the run at the three and a half minute mark.  However, it was too late, as Outlaw had found his rhythm.  He hit (3) three-pointers in the final two minutes of the quarter, with the final one being off of a steal and a pull up at the buzzer.  A 35-point quarter for Arcadia was the doing of Outlaw, as he scored 19 of them himself.

This gave the Titans their largest lead of 16 points to go into the final quarter.  It was going to take a lot of energy for Fountain Hills to come back.  They brought the energy to start the fourth, scoring 10 unanswered points and forcing an Arcadia timeout. The problem for Fountain Hills was that Calvin Outlaw as on the other team.  Outlaw helped to hold off the late run and give the Titans a 71-58 victory.

Outlaw finished with a game-high 31 points, hitting 5 three-pointers in the game.  Trent Wilson provided a double-double off the bench with 10 points and 11 rebounds.  Fountain Hills was led by Christian Wachs’ team-high 20 points and 4 threes.  Matt Fisher also contributed 11 of his own.

Each of these one-loss teams looked to turn their fortune around in this matchup. Centennial had the early edge in this one; however they suffered a tough blow when 6-foot-6 senior Shawn Poindexter picked up his second personal foul two minutes into the game.  6-foot-2 senior Jake Mason did a good job filling the void, scoring 9 points in the quarter and collecting 5 rebounds.

Coronado struggled against the more athletic Centennial team who got into their fast break early.  The first quarter ended with a Daniel Alvarez (5-foot-10 senior guard) buzzer-beater to cut the Centennial lead to 12, 27-15.

The second period brought similar gameplay, as the lead never got below ten, but never went above 13.  After two, the score was 41-30 Centennial.

The halftime leaders for Centennial were Jake Mason who had 11 points and 7 rebounds, and Xavier Villanueva who contributed 5 points.  Coronado’s offense came from their three-point shooting.  Led by 5-foot-4 junior Andre Bellamy-Young and 6-foot-1 senior Brett Wacker, who each had 8 points and (2) three-pointers, they were able to keep the game within reach.  However, as soon the third quarter started, Centennial asserted their dominance - extending the lead to 20.

After three, the score was 66-43.  At this point, Coronado stood no chance, and Jake Mason helped to close out a dominant victory, 86-59.

For Centennial, a great performance by Jake Mason led them to the win.  He finished with a game-high 25 points and 10  rebounds in the win.  Villanueva also did a nice job of controlling the game, and finishing with 7 points and 5 assists.

This game was thought to be the matchup of the two best teams in the tournament.  These two run-and-gun teams were set to battle for a trip to the championship game.

Marcos De Niza showed their dominance early on the defensive end.  They opened up the game with a 7-0 run very quickly.  The Padres' zone defense forced turnovers, which were converted into fast-break points.  After one quarter, Marcos held a 23-10 lead.

The second quarter started with Peoria showing some fight.  Led by 6-foot-6 junior forward Jose Bustamante inside, they cut the lead to 7 with three minutes left until halftime.  Following a turnover, Peoria's 5-foot-10 junior Toby Gamble put up a one-footed three on the top of the key, which banked in to cut the lead to four.

For Peoria, 5-foot-10 junior Brody Sharkey was the only Panther in double-digits with 10 points.  Jose Bustamante also scored 9 points and had 5 rebounds.

Whichever team was able to come out strong to start the third quarter would give themselves a better chance at winning.  That team was Marcos, as they opened the third with a 13-4 run.  Richaud Gittens fueled the run for the Padres.  Peoria lost the game in the third quarter, as they were outscored 30-13.

Marcos De Niza, being the best team in the tournament, was able to hold onto the lead and finish with an 87-75 victory.  Richaud Gittens was the story in the game, as he scored a game-high 33 points (21 in the second half) to lead all scorers.  He also grabbed 7 rebounds for Marcos.  Devin White contributed 15 points, while Tyler Lazenby scored 17 for the Padres.

Bustamante was the man for Peoria, as he had a double-double: 22 points and 14 rebounds.  He shot 16 for 17 from the free throw line.  Brody Sharkey also scored 15 for the Panthers in the loss.

For the host team Horizon, nothing would be sweeter than a trip to the finals in their own tournament; however they faced a tough matchup with Clay Crookham and Scottsdale Christian Academy (SCA).  SCA was coming off of a close win against Centennial, and they would be tested again against the Huskies.

The game started out very slow, with both offenses taking their time.  With both teams struggling to score, SCA had the first four points of the game.  Four points would end up being their total for the quarter.  After Horizon scored their first bucket at the three-minute mark, they went on a quick 10-0 run to make the score 10-4 after one quarter.

Once again, the second quarter started out slow, as SCA finally broke the scoring drought for both teams at the three and a half minute mark.  Just like in the first, Horizon finished the quarter strong - going on a 9-2 run and forcing an SCA timeout.  The timeout seemed to help SCA, as they ended the quarter strong, making it a 26-14 halftime score and Horizon holding on to the lead.

At halftime, Horizon 6-foot-4 senior Sean Deacon had 6 points and 6 rebounds, while 6-foot-3 senior Jordan Esser was all over the place on defense and offense - scoring 4 points and having 3 rebounds.  Off the bench for Horizon, 6-foot-4 sophomore Austin Deweerdt gave the Huskies 6 points.

For SCA, 6-foot-4 junior Jared Frame had 5 points, while Cavin Sherman and Connor Segneri each had 4 points.  If Horizon could keep the slow pace, they would have a better shot at winning a trip to the championship game.

The third quarter had SCA showing some fight, as they were able to cut the lead to four.  Horizon seemed to be falling apart, until a sudden 7-0 run gave them a 38-27 lead.

The fourth quarter brought excitement, as SCA once again fought back - led by a couple buckets from 6-foot-3 senior Sam Fillingame off the bench.  The Eagles started calling timeouts after every score to set up their defense.  SCA 6-foot-4 freshman Corbin Lenderink came in off the bench with a big three to make it 43-37 Horizon.  Another stop and score by SCA made it a four-point game with only two minutes left.

Just as everybody expected Horizon to stop and hold the ball, 5-foot-10 junior Christian Coraggio got a good look at a three-pointer, and hit it to put the lead to seven with one and a half minutes left.  That shot seemed to be the dagger, as the Huskies were able to hit their free throws down the stretch, and come away with a 51-40 victory.

Horizon was led by Sean Deacon’s 8 points and 13 rebounds, and Jordan Esser’s 6 points, 7 rebounds (3 offensive), and 3 assists.  Austin Deweerdt also gave them 8 points off the bench.  Nobody for Horizon had double-digit points, as it was a team effort, which gave them the win.

For SCA, Jared Frame finished with a game-high 14 points, as he hit (3) three pointers.  Connor Segneri contributed 8 points, 3 rebounds, and 3 blocked shots.  Possibly the reason for SCA’s offensive struggles, was because Clay Crookham was held to one point for the game.  Horizon's 6-foot sophomore guard Abraham Sesay did a great job defending him on the ball when he was in the game - shutting him down.