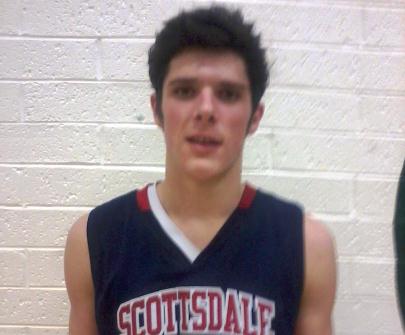 The first game of the tournament included some great players on both teams.  6-foot-4 senior wing Richaud Gittens (Weber State signee) was hoping to lead his Padres past the Titans of Arcadia High School (5-8), and their dynamic scorer, 6-foot-1 junior guard Calvin Outlaw, in what promised to be a shootout.

From the opening tip, Marcos De Niza (6-2) came out in a zone press, which disrupted the Arcadia guards - forcing turnovers which were converted into easy buckets.  A quick 13-0 run by Marcos De Niza to open up the game had them in good shape. They held onto the lead throughout the quarter.  However, 5-foot-10 junior guard Sanders Swatzell turned it on in the last couple minutes - scoring 8 points in an Arcadia 13-0 run to make the score 23-15 Marcos after the first.  Arcadia was able to keep in it with their three-point shooting - hitting four in the opening quarter.

Gittens had 15 points at the half, while 6-foot-1 junior guard Kelsey Trevino pitched in 7 points off the bench.  For Arcadia, Swatzell was their leading scorer with 10, followed by Calvin Outlaw’s 6.

Arcadia needed Outlaw to step up and carry them in the second half.  He did just that, scoring 11 in the third quarter, however Richaud Gittens and 6-foot-3 senior guard Devin White wouldn’t allow them to cut it close - the score being 81-58 after three periods.

A strong fourth quarter by Outlaw and the Titans still wasn’t enough, as Marcos De Niza held off Arcadia.  The Padres put up 102 points to Arcadia’s 86.

Richaud Gittens led the way for Marcos - scoring a game-high 26 points and hitting 5 of the Padres 8 three-pointers in the win.  He was followed by Devin White’s 19 points and 4 steals, as well as 5-foot-11 senior guard Stefan Tellis’ 12 points and 3 three-pointers.

The bright spot for Arcadia was Calvin Outlaw who scored 19 in the second half, finishing with a total of 25 points.  Sanders Swatzell and 6-foot junior Agazi Yohannes each scored 12 for the Titans.

A very fast Peoria High School (7-4) team was set to match up with a well-balanced Fountain Hills (2-5) team in game two of the day.  Fountain Hills came out in a press, disrupting the flow of Peoria’s offense and converting turnovers into easy points. Fountain Hills’ energy early helped to give them a quick lead.  However, Peoria was able to keep it close.

6-foot-3 senior Matt Fisher scored 8 points in the opening quarter to help give his Falcons a 23-21 lead over Peoria.

The second quarter began and Fountain Hills came out in a zone, trying to take away the penetration of the quick Peoria guards. They did a good job closing the lanes, however Peoria was still able to draw fouls and get to the line.  The problem for Peoria was capitalizing once they got there.  Missed free throws by the Panthers helped Fountain Hills stay in the game.  However, Peoria’s firepower on offense helped fuel a 9-0 run to make it 39-29 midway through the quarter.

At halftime, Peoria held a 45-38 lead.  6-foot-6 junior forward Jose Bustamante led the Panthers at half with 13 points and 4 rebounds.  Junior guards Buoy Maker and Brody Sharkey each had 7 points.  For Fountain Hills, Matt Fisher was carrying the load with 12 points, and 6-foot sophomore Paul Bryniarski pitched in 7 of his own.

The third quarter began with up-tempo, fast-paced action.  Peoria exceled in the fast break and took the game over in the third quarter.  Turnovers by Fountain Hills fed Peoria fast break layups to build a 69-53 lead after three quarters.

In the fourth quarter, the Falcons stood no chance at coming back; as Peoria went on to win by a score of 85-66.  The Panthers offense came from many people.  Buoy Maker scored 19 points and had 6 rebounds, while Brody Sharkey saw the floor well, scoring 17 and dishing out 7 assists.  Off the bench, 5-foot-10 junior guard Toby Gamble contributed 12 points.

The third game of the night featured the Centennial Coyotes vs Scottsdale Christian Academy Eagles (SCA).  Both teams started in a man-to-man defense.  6-foot-3 senior combo-guard Clay Crookham got 6 quick points and 2 assists to 6-foot-7 junior power forward Connor Segneri.  The rest of the quarter was a little slow, but the period ended with a 19 to 11 first quarter lead for SCA.

Clay Crookham had 8 points, 2 assists and 3 rebounds, as he dominated the flow of offense for SCA.  6-foot-2 senior shooting guard Jake Mason had 5 points for Centennial.

More of the same in the second quarter as Clay Crookham, once again, took over the game with his all-around hustle, vision and quickness.  But (3) three-pointers in a row by Centennial, as 6-foot junior guard Xavier Villanueva would hit two and Jake Mason hitting one to cut the lead down to 1 for SCA, 24 to 23.

The bench went in for SCA and that left the door open for Centennial to get back in the game.  6-foot-6 senior power forward Shawn Poindexter would get 6 easy points in the paint to tie it at 30 all at the half.

Poindexter and Mason had 7 points each to lead Centennial, while Clay Crookham had 13 points.

The third period was Poindexter’s time to shine.  He started with 5 points straight to give Centennial a 35 to 33 lead.

Then Connor Segneri, who was guarding Pondexter, decided to help out and fill it up with 4 points in a row.  Then a deep 3-pointer by SCA's 6-foot-4 junior forward Jared Frame would give the lead back, 40 to 39.

Poindexter would show his range and hit an impressive, deep 3-pointer.  Poindexter scored 15 points in the quarter, but SCA would cling to a 46 to 42 lead.

The fourth period would show a tight game with a 51 to 47 SCA lead.  It was a defensive battle, as both teams look a tad tired.  There were a few nice blocks by Poindexter and two charges taken by Crookham.  The stars for both teams would try to put their teams on their back. Then a driving lay-up by Crookham would end the drought for both teams, as SCA would take a 58 to 54 lead.

A time-out was called to make a key play with 1 minute left in the game.  Then a clutch, deep two-pointer by Villanueva with 38 seconds left would cut the lead to 2, for a 58 to 56 SCA lead.

The last time-out was called for one last play to tie it up.  Centennial would attempt a desperation three-pointer by Villanueva to only miss and lose the game, 59 to 62, in what was the best game of the night.  Both teams played their heart and souls out and both teams were well coached - getting the most out of their players.

The true story of the game was Clay Crookham, who controlled the game with his pace, toughness and scoring.  Clay had a team-high 18 points 5 rebounds, 4 assists and took 2 charges for SCA.  Shawn Poindexter had a game-high 25 points for Centennial, but unfortunately didn’t have any points in the last 5 minutes of the game.

The last game of the night featured the host team, Horizon Huskies (4-7) against the Coronado Dons (1-9).  The game saw a fast-paced start, led by 6-foot-3 senior guard Jordan Esser’s 6 points and 6 rebounds for Horizon, and sophomore guard Adrian Crespin’s 6 points on two deep 3-pointers for Coronado.  Horizon had a 22 17 lead after the first period.

It was slow going in the second quarter for Coronado, since Horizon controlled the glass and as a result of the great defense by 6-foot-4 senior Sean Deacon and Jordan Esser.  Finally, 5-foot-10 junior guard Christian Coraggio would hit a 3-point shot in the corner, after  a great pass by 6-foot sophomore guard Brandon Burke - taking a 32 to 20 lead for Horizon.

After a fourth three-pointer by Centennial's 5-foot-8 junior guard Anthone Crespin, Horizon would cling to a 36 to 25 lead.  Coronado would lose the battle on the boards and fail to get any second chance opportunities, while Horizon would get many hustle plays to grab a huge lead.

For the last play of the half, Brandon Burke would hit a deep 3-point shot shot all the way from Chandler for a 45 to 31 Horizon lead at the half.

The third quarter started with 6 points out of the gate by Sean Deacon to give Horizon a big 51 to 31 lead.  Then Horizon would start to show their defensive abilities with more work on the glass by Esser and Deacon.  Sean Deacon would also begin to take over the game with his vision, rebounding and scoring.  Also, as a result of the steady point-guard play from Brandon Burke, the game would snow-ball t0 a 66 to 41 lead for Horizon.

The final period of play would begin with one of the few offensive rebounds of the game and a lay-up by Coronado's 6-foot-1 senior forward Brett Wacker.  But more of the same would take place in the quarter, as Horizon would dominate.  A spectacular steal and a dunk by Jordan Esser would get the home crowd going wild.  The final score was 77 to 62 for Horizon.

Horizon was led by Sean Deacon’s double-double of 10 points and 10 rebounds.  Also Jordan Esser was everywhere with a game-high 16 points, 8 rebounds, 3 assists, 3 steals, 5 deflections and 4 blocks.  Brandon Burke had 15 points and no turnovers in the game.

Horizon will play SCA tomorrow in the semi-finals and Coronado will play Centennial in the loser bracket.