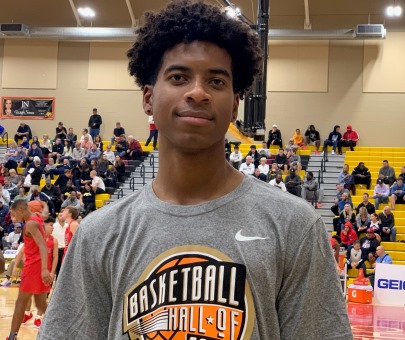 The Arizona high school basketball season got underway on Monday afternoon across the state with numerous Thanksgiving pre-season events kicking off. The Hoopsgiving Tournament at Sunnyslope High School is always a fun event and has grown over the years. I was able to catch some of the action at Sunnyslope on Monday, as a talented Sunnyslope (1-0) team kicked off their season at home with a big 71-34 win over Greenway HS (0-1).

Sunnyslope would utilize a big second half to blow the game wide open against Greenway, as they would go on a 20-6 run with 18-straight points in the third period to take a commanding 52-30 lead after (3) quarters. Sunnyslope would outscore Greenway 19 to 4 again in the fourth period. Both teams were within 10-points of each other at the half. Sunnyslope was led in the game by the play of 6-foot-10 junior post Carson Basham and unheralded 6-foot-6 senior wing Xzavier Lino.

Sunnyslope's Xzavier Lino finished with a team-high 21 points in the win. Lino is a very underrated prospect as he currently does not possesses an offer, but is a definite division-I talent possessing size, length, athleticism and a nice overall offensive skillset. An excellent shooter of the basketball with range, Lino is a superb prospect that is soaring well below the recruiting radar. This young man is a serious talent that will be a big factor for Head Coach Ray Portela this high school season, and I expect his college recruitment to really take off during the spring evaluation period.

Greenway was led by the overall play of 6-foot-3 junior guard Nick McClain who finished with more than half of his team's points in the loss, finishing with 23 points in the loss. McClain is an athletic guard prospect that is a good defender and slasher.

Chaparral High School (1-0) kicked off their season on Monday with a big 75-46 win over Thunderbird HS. Chaparral was led primarily by the versatile and athletic play of 6-foot-5 senior wing Jordan Josephs (pictured) and the sharp-shooting of 6-foot-1 senior guard Matt Whisler.

Whisler is a crafty and skilled guard prospect that plays with a high level of confidence and is a skilled overall performer that keep defenses honest, and will have a strong season for Head Coach Dan Peterson. The Firebirds though will rely heavily on the play of Josephs this high school season. Josephs is a big-time athlete and finisher, but has worked hard on his perimeter skills in the off-season, and now he is a very capable three-point shooter with range on his shot, which has opened up his overall game since his junior season. Josephs is an excellent slasher and finisher and he thrives in the open floor. Josephs is another very underrated prospect and would be a very good signing for a smaller college program this spring.

Chaparral will face Sunnyslope in the second round on Tuesday evening at 8PM of the Hoopsgiving Tournament.

Notes: Sunnyslope is absolutely loaded this high school season and will compete hard for this year's 5A State Championship, although the division is absolutely loaded this high school season. Sunnyslope has the most loaded lineup of players though in the division. Sunnyslope began their season on Monday though without the services of two of their elite performers, gifted 6-foot-7 sophomore forward Elijah Saunders (transfer rules) and talented 6-foot-8 junior forward Grady Lewis (injury). The addition of these two top-rated prospects to an already talented lineup for the Vikings will really take the team to another level. Once these two top-rated prospects are inserted into the lineup, this team will be extremely fun to watch this season, and will be the most talented team on paper that Sunnyslope has ever had at the school.

Chaparral High School Head Coach Dan Peterson is one of the hardest working coaches in the state, and he has paid his dues in the process. After a long stint at Moon Valley HS, Peterson has built the Chaparral program into a force in the state annually. This season though is a difficult one for Peterson, who lost several players to transfers before the season, and also lost the services of promising 6-foot-11 sophomore post Adrame Diongue due to ineligibility by the school. Diongue moved to the state of Arizona last spring, after playing last season at Mount Zion Academy in North Carolina.

Diongue should not be ineligible by the school or the AIA, as he is here in Arizona with his guardian and is a kid that wants to live a normal life like any other young men at the Chaparral school. Diongue was cleared to play by the school on the junior varsity this season, but not cleared to play for the varsity team, which makes absolutely no sense. This young man should be permitted to play this season, and the school should be carfeul in their treatment of this situation, as it could be seen as discrimniation. Simply because Diongue is a big-time basketball talent, does not justify him being treated unfairly.