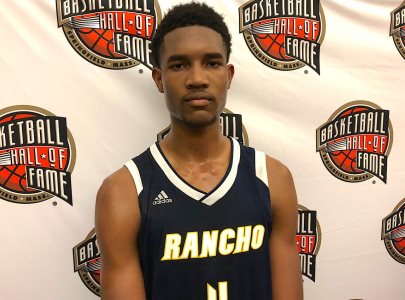 The exciting Hoop Hall West event absolutely took over the state of Arizona's basketball action this week at Scottsdale's Chaparral High School, as the event took tournament basketball to another level. Comprised of some of the top basketball programs and players in the country, Saturday's action at the event was fierce and featured some big-time match-ups. As a result, Saturday's Session II of the day's event schedule was reported to be sold out out since Tuesday, as the fans showed up in the ticket sales for an opportunity to catch the son of NBA superstar Lebron James in action, Bronny James. The possibility that Lebron James would be in attendance for the contest loomed, which also created heightened anticipation.

The overall action Saturday evening at the Hoop Hall was exciting also as there were numerous match-ups that took place, which featured an ultra-loaded lineup of teams and games that made it worth staying in the gym all day and evening. In the first session of games on Saturday's finale, the Hoop Hall was highlighted by an amazing tournament record-breaking 51-point performance from Liberty High School's (NV) 6-foot-7 senior forward Julian Strawther. After the amazing record breaking performance, Rancho Solano Prep would fall to Crossroads High School (CA), 47-50, a game in which a no-call by the referee ended the game. Rancho 6-foot-1 senior guard Tyson Legner would lead his team with 18 points in the loss.

Here are recaps of the remainning games on the evening on Saturday, a night that was filled with electricity and one of the biggest crowds I have ever seen at a high school basketball tournament . . .

To end the day's Session I of games, a tough and competitive Shadow Mountain team would face a loaded Coronado High School (NV) program, which was led by one of the nation's top 2021 prospects, 6-foot-5 junior guard Jaden Hardy. Shadow Mountain's talented and very unheralded 6-foot-5 senior, do-it-all wing prospect Shemar Morrow was coming off an excellent performance on Thursday evening. Morrow poured in a game-high 32 points (4 three-pointers) in his team's 76-68 win over Regis Jesuit HS (CO). A match-up between Morrow and Hardy would make for a nice match-up between two of the top wing prospects in the West.

In the game's first half, Morrow would work hard to keep his Matadors in the contest, but the size of the Coronado HS team would wear Shadow Mountain down in the first half, as they would take a 46-35 lead into the half, after a last second three-pointer by Shadow's 6-foot-5 senior forward Elijah Cole. Morrow would finish the first half with a team-high 11 points, while Coronado would get a balanced scoring attack, led by Jaden Hardy with 22 points and 18 points from 6-foot-5 senior Tyrelle Hunt.

In the third period, the game would get out of hand somewhat for shadow Mountain, as Coronado would jump out to a 16-point lead, 65-49, with 2 minutes left to play in the period. The combination of Hardy and Hunt would begin to impose their will on the Matadors, while Morrow would pick up his fourth foul of the game. Coronado would take a 71-53 lead in the fourth period, and would not look back, as they would extend their lead in the fourth period - winning the contest in fine fashion, 95-60. Hardy would finish with a game-high 40 points in the win, while Hunt would pour in 25 points of his own.

Perry High School would come into this exciting match-up with legendary Mater Dei HS CA), looking for the upset, but would have their work cut out for them, as Mater Dei is absolutely loaded with talent and size. Led by the overall play of 6-foot-3 senior guard Devin Askew (University of Kentucky signee), this team is another very talented and skilled team of performers for the Mater Dei program. Perry, of course, is led by the play and presence of 6-foot-11 sophomore post Dylan Anderson. Mater Dei though is very big as well, so the impact of Anderson would be difficult to really take affect in the contest. Mater Dei's ability to defend the low post and also on the perimeter, while running their offense efficiently would allow them to jump out to a 20-point lead in the game's first half. As result, Mater Dei would continue to run their offense efficiently, en route to a big 77-42 victory over a very talented Perry team, that will have a strong season this year in Arizona.

Rancho Christian HS (CA) pulled out a narrow 3-point victory over an historic Christ The King (NY) program, as the game was highlighted by the super and eye-popping overall ability and play of 7-foot-1 senior post Eric Mobley (USC signee). Mobley (pictured) is the nation's premier prospect in America's 2020 Class, and he proved why many consider him as the future #1 pick in the 2021 NBA Draft. Mobley's tremendous length, size, agility, athleticism and overall skillset are there to marvel at, and he played every position on the floor for his team, including point guard at times, to lead his team to the big win over a very athletic and tough New York program.

This game was the highly anticipated match-up of the event, as Sierra Canyon features an absolutely loaded lineup of talented performers, led by the superb talent of 6-foot-6 junior wing Brandon Boston (University of Kentucky commit). Millennium is one of the state's premier teams/programs in Arizona, and led by the play of 6-foot-9 junior post DaRon Holmes, they were looking for the upset in front of a loaded crowd of fans from both Arizona and California.

Justus Jackson would then catch fire to close out the period in fine fashion, as he would knock down consecutive long-range bombs in transition - the second one from 35 feet away with a defender in his face. The explosion by Jackson would give Millennium a nice 20-13 first quarter lead to end the period.

After the first period, Sierra Canyon's Boston would take over the contest, as he would prove why many analysts and scouts believe that he will become an NBA player over time. Boston's superb jump shot and ability to make shots off the dribble, off the catch or make plays off the dribble are exemplary. Boston would put on an absolute show in the contest - leading his team to a 76-66 win.

DaRon Holmes would also prove why he is considered among the elite prospects in America's 2021 Class, as he would make shots from almost everywhere on the floor, and also finish strong over defenders in the loss. Holmes would finish with a game-high 20 points in the game, while Jackson would finish with 17 points. Jackson did very well for himself in the contest - proving that he is worthy of high-major Division-I level recruitment.

The game was highlighted by an impressive alley-oop dunk by Sierra Canyon freshman guard Bronny James, and also an alley-oop pass from James to Boston for another amazing dunk, which brought the large crowd to their feet.

Coming off off a very subpar performance in their first game of the Hoop Hall event, where they did not play together or defend, the Hillcrest Prep team played together and were very focused defensively against a loaded Hamilton Heights program that has been undefeated this high school season (9-0). Hamilton Heights is very big and ultra-athletic as a team, and very difficult to match-up with. They would jump out to a 21-13 first quarter lead in the contest, and would take a 31-21 lead into halftime. They would not look back in the game - winning 67-52 over Hillcrest Prep.

Hillcrest Prep will now travel to New York this week, where they will compete in the Battle of the Apple Tournament at the Barclays Center in Brooklyn, New York. Arizona Preps will be in attendance for this event and will bring you highlights from the tournament, as Hillcrest looks to face another historic opponent, Brewster Academy (NH).