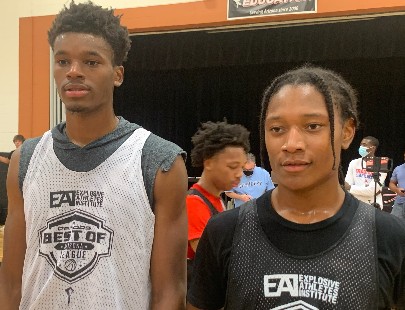 The Pangos Best of Arizona Summer League has now officially come to an end, after more than a month of exciting action. The league, organized by West Coast top-rated scout Dinos Trigonis and national scout Chad Groth, was an excellent opportunity for Arizona's top basketball prospects to gain national exposure to college coaches, scouts and media, during a time when basketball is not being played around the country - due to the growing COVID-19 pandemic.

While some basketball enthusiasts were not in support of the league, Trigonis and Groth did an excellent job in creating an opportunity for Arizona basketball to be played in a safe environment, where temperatures were checked daily of everyone in attendance, and masks were worn by those in attendance. The league quickly gained national attention and did an excellent job of setting the standard for how future events will be organized and operated. In a current COVID climate where prospects around the country have seen their recruitment opportunities diminish, the Pangos Best of Arizona League benefited every prospect in participation a great deal, as many prospects received scholarship offers and serious recruiting interest.

Played on Tuesdays and Thursdays weekly, the event was well attended by scouts and media, and also had each of the game's covered by Ballislife, Overtime and also BallerTV.com, which allowed college coaches around the country to view the games from their respective computer desktops. As a result, many prospects in the event prospered a great deal in their recruitment.

With many of the state's top prospects in action throughout the event, and also some top prospects from other states in participation, two prospects stood out from the competition, as Montverde Academy (FL) 6-foot-9 senior forward DaRon Holmes and AZ Compass Prep 6-foot-4 senior guard Ty Ty Washington earned League Co-Most Valuable Player honors for their amazing performances throughout the league. Both top-rated prospects played in every game throughout the league, and did not disappoint, as both elite prospects raised the level of play for everyone in attendance and online to marvel at.

Holmes and Washington were currently rated among the elite prospects in Arizona's 2021 Class, but Holmes recently decided to leave the state for his senior season, and will now attend nationally acclaimed Montverde Academy (FL). Holmes advised Arizona Preps that his decision to leave the state of Arizona was based on his commitment to his development and growth as a college prospect. Holmes is all about his development on and off the floor, and while everyone had left the gym on Thursday evening, Holmes was seen picking up garbage in the gymnasium. Holmes is an excellent example for today's top student-athletes, as he is as fine a young men as I have ever met. He is extremely approachable and very well spoken - an excellent testament to his father, who has been an excellent role model to his son. In today's day and age of self entitlement, Holmes is the exception.

Holmes showed off in the league why he is so highly regarded by our staff, and is well deserving of a Top 30 national ranking in the 2021 Class, as he displayed an excellent ability to play inside and out. He ran the floor like a guard and finished everything strong at the rim, showcasing NBA athleticism and potential for the future. Holmes also shot the basketball extremely well from longer distances, handled the basketball in the open floor and made plays for his teammates consistently, with a very unselfish approach - proving that he has no weakness in his game. Holmes was flat out dominant each night and we will surely miss watching him play in Arizona, but I have a feeling we will soon get to watch him on national television.

Ty Ty Washington is now one of the hottest prospects in the country, after he ripped the nets of the league consistently, and looked unguardable throughout the event. Washington shot the basketball consistently from everywhere on the floor, and made plays off the dribble, which, often times, resulted in superb dunks by the gifted guard prospect. Washington performed at an extremely high level, as he has done for some time now, and exploded for a 49-point performance during the league, which caught rave reviews nationally - earning Washignton numerous offers, to go with his already long list of offers that he currently has.

Washington is among the nation's elite guard prospects, and, like Holmes, deserves a much higher national ranking in the nation's 2021 Class of prospects. An elite guard prospect that can score from all three levels, Washignton is a complete guard that can play anywhere in the country in college. It will be very interesting to see which new high-major college programs jump in on Washington, as he already has a long list of high majors in pursuit.

After a troubled time last year at Cesar Chavez High School, Washington has done an excellent job of rebuilding his reputation. He is a very nice young man with an excellent smile and is very soft-spoken. He is a kid with a lot of potential for the future, on and off the court, and is just another reason why I personally enjoy working with young men. Everyone needs development and also deserves chances to develop. Washington has set an excellent example for young men for the future. It's okay to make mistakes, and it is how you overcome those mistakes - there lies the development.

Washington and Holmes are two promising prospects for the future, and I really enjoyed watching both of them throughout the league. Both young men have very bright futures ahead of them, and should both make Arizona very proud over time.