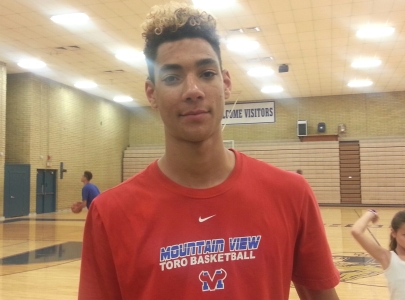 Another prospect that has emerged this spring is Mesa Mountain View High School's 6-foot-8 rising junior forward Curtis Hodges.  While an almost unknown basketball prospect before the spring, Hodges has emerged this spring with numerous strong performances on the club circuit.  As a result, Hodges has reeled in his first scholarship offer from a local mid-major division-I basketball program.

Hodges has been widely recognized throughout the state of Arizona as a serious football prospect - already receiving serious division-I interest as a wide receiver for the Mesa Mountain View football team.  But Hodges is 6-8 in heigth and looks much more the part of a serious  basketball prospect and not as a football prospect.  But Hodges will have to make a decision at some point, as he will have some serious options for himself - a nice problem to have.

This spring, Hodges emerged as a nice college basketball prospect while playing on the club circuit with his club program, the Arizona Magic Elite - coached by Kenny Mullins.  The team won two major events this spring - winning both Pangos events of the spring in Las Vegas and in California.

As a result, Hodges caught the attention this spring of many college programs and earned a nice scholarship offer from Grand Canyon University.

Hodges is a long and very athletic post prospect that is just realizing his true potential as a player.  He still is very raw offensively and needs a lot of work to develop into the player that he will become over time, but what better coach to develop him over time than Mountain View HS head coach Gary Ernst - Arizona's winningest high school coach ever and a true developer of talent.  In the past, Ernst has developed such players as Harper Kamp (CAL), Dennis Latimore (Notre Dame), Brendon Lavender (Arizona), Kendall Wallace (UNLV), Stephen Rogers (BYU) and Tanner Shell (Arizona State), just to name a few.

Hodges has the potential to develop into another serious prospect for the Mesa Mountain View program, and become one of the better overall prospects in Arizona's very loaded 2017 class of prospects.