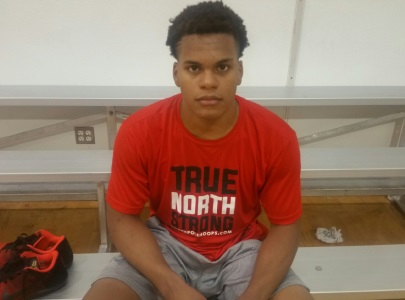 After going over the numerous recruiting options for himself, rather than wait for the spring evaluation period, Hillcrest Prep's 6-foot-6, 230-pound versatile prospect Shamiel Stevenson has given a verbal commitment to a program in the ACC Conference.

On Tuesday afternoon, Stevenson, who saw several high-major programs lose interest in him over the course of the high school season, decided to end his college recruitment.  Rather than wait for college programs to gain more interest in him, Stevenson decided to give a verbal commitment to PITT.

Stevenson chose to verbal to PITT over other offers from Arizona State, Georgia Tech and USC.

Stevenson will sign with PITT during he late signing period in April.

Congratulations to the Hillcrest Prep staff on this amazing accomplishment - another commitment from this year's talented group of Hillcrest players.

Arizona Hoop Review Scouting Report:  Stevenson is a very impressive athlete with a strong build and pop off the floor.  He possesses a massive upper body, which he uses to bully defenders off the dribble and easily finish a variety of plays at the rim through contact.  Stevenson bounces off defenders often on drives to the basket, and is an excellent finisher over and around defenders.  He also has a good mid-range game, and is able to knock shots off the dribble and effectively create space for himself to get his shot off (good FT shooter as well).  Stevenson is an excellent athlete (gets off floor very easily for his size), and is capable of finishing big dunks in transition - thriving in the open floor where he is at his best.  He is also very effective on the glass - a good rebounder on both ends of the floor, when he focuses in this area.  Should be a much better rebounder with more focus.  Likes to push the ball out in transition.  Capable of playing several positions on the floor.  A nice looking prospect that is capable of becoming a very good sleeper prospect.