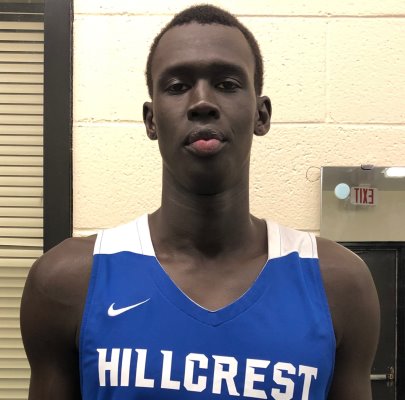 This weekend, the talk of the nation's basketball community and every media outlet was all about Hillcrest Prep's 7-foot, 235-pound senior forward Makur Maker, as the gifted NBA prospect gave a verbal commitment to an historic black college (HBCU), Howard University. The news was played over and over on ESPN throughout the weekend, as numerous national scouts and media marveled at Maker's decision to choose Howard University over other big national blue-blood programs - Kentucky, UCLA and Memphis. The news was the talk of the weekend - bring amazing national exposure to himself, and the Hillcrest Prep basketball program.

Makur could be seen all weekend long on national television displaying his amazing talents, while playing for a loaded Hillcrest Prep team last season, as he helped lead the program to numerous big wins last season, including several tournament championships. It was an amazing sight to behold throughout the July 4th weekend, as everyone marveled at Makur's decision to elect for an HBCU. It has been widely reported that Makur would elect for the NBA Draft, rather than choose a college program, but, after the COVID pandemic changed the NBA Draft this season, Makur decided to change his plans as well, and make a college commitment - landing at Howard University, and skipping the consistent lure to go to a bigger named college program.

Makur's decision is colossal and could change the recruiting landscape as we once knew it, as many other big-time prospects nationally could begin to follow suit in the future. There has been talk about such a commitment for many years by basketball prospects and coaches around the country, so Makur's decision was the splash needed to make such a situation a reality. Makur has already called out Mikey Williams to join him in his move. Williams is a 5-star prospect from America's 2023 Class. Williams indicated on social media that a similar decision by himself could be in the works.

"I was the first to announce my visit to Howard & others started to dream "what if," Makur wrote on Twitter. "I need to make the HBCU movement real, so that others will follow."

It will be interesting to see if Makur actually suits up for Howard, as the future college basketball season is still in the balance, due to the uncertainty of the COVID-19 pandemic. Makur may still go right to the NBA Draft, when it does eventually take place, but, either way, the impact of his huge decision has already make a tremendous splash in the recruiting world, and the effects of his decision could change the basketball world for many years to come.

Maker has already submitted paperwork to the NBA office to enter the 2020 NBA Draft, and has had loads of NBA scouts follow him throughout his high school career. Maker is currently projected as a future NBA first-round pick, and could jump up to the NBA Lottery as the draft eventually takes place.

Arizona Hoop Review Scouting Report: At 7-foot in heigth, Maker is a superb talent and unlike anything most scouts/media have ever seen, as he is able to play on the perimeter - displaying extreme versatility and agility on the floor. Maker is an elite-level talent that is glaring on the basketball court, and stands out a great deal, as a result of his extreme size, length, skillset and athleticism. While Maker is a pro-level talent, he should see his future as a small forward in the NBA, much like that of Dallas Mavericks (NBA) forward Kristaps Porzingis. He runs the floor very well and is a very good ball handler in the open floor. An excellent finisher in traffic and in the open floor. A good shooter with range on his shot and a good mid-range game. An active rebounder and finisher around the basket. A solid defender with good lateral quickness. An excellent shotblocker that can block and change shots with regularity. Maker has extreme upside and potential for the future and is a rare level talent.