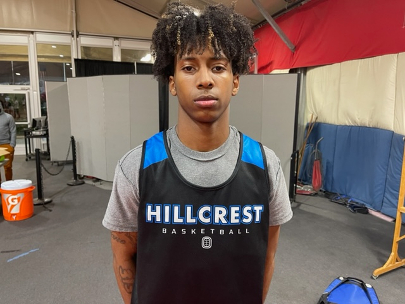 A lot has changed quickly in the life of Hillcrest Prep's 6-foot-2, 175-pound athletic junior guard prospect KJ Perry. After having a strong junior season for Gilbert High School and helping lead the program to a 5A State Championship Runner-up performance, Perry has since reclassified to the 2024 Class, and changed prep programs a couple times. After moving to PHH Prep first, Perry then decided to take his game to Hillcrest Prep not long after, where he is now flourishing alongside a loaded group of talented prospects. In fact, Perry has gone from a prospect with very little recruiting interest, to receiving a big PAC-12 offer for himself, as the Arizona State Sun Devils have extended an offer to Perry.

The tremendous offer from the Sun Devils and Head Coach Bob Hurley and his staff came as a surprise for sure, but shows just how much Perry is advancing as a member of the Hillcrest Prep program, which has gone to another level - playing games this season on the Overtime Elite Circuit. Perry is the point guard for an absolutely loaded roster, which includes numerous high-major Division-I prospects. Perry's unique level of athleticism and ability to defend are glaring attributes for the guard prospect.

The big Arizona State offer for Perry is his first offer to date. It will be interesting to see if he takes the offer and ends his college recruitment soon, or if he continues to go through the recruiting process. An offer from Arizona State is big for Perry, and I cannot imagine him passing up this opportunity for himself.

I will continue to follow KJ Perry and his college recruitment closely - bringing you any updates as they continue to develop.

Arizona Hoop Review Scouting Report: Perry is a superb athlete and a unique player for sure. One of my favorite prospects in the state, regardless of class, as Perry does not need the basketball to impact the game. He can play off the ball and make plays consistently, while also being a potential lock-down defender over time, and at the collegiate level - his most valuable attribute and asset as a player/prospect. Perry is a skilled prospect, but thrives in the open floor or while slashing to the basket. He finishes very strong at and over the rim, possessing NBA athleticism already. Over time, he will blossom as he matures, as a result of such unique bounce off the floor. He is a good ball handler and passer that sees the floor, and is capable of playing both guard positions on the floor, although he is at his best off the ball, where he can score at a high rate. Perry is an excellent sleeper prospect, and has a bright future ahead of him, even though other prospects in the 2023 and 2024 Class, currently, are receiving more recruiting attention.