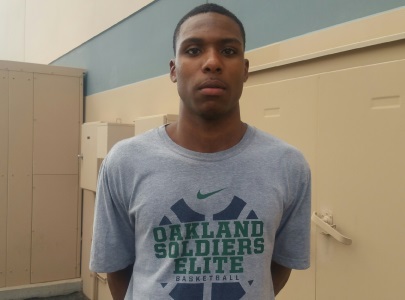 Hillcrest Prep Academy is quickly putting together some of the best talent in the country, and a big reason for that is the emergence of 6-foot-5, 185-pound senior wing Alfred Hollins.  Hollins moved to Hillcrest this fall in an attempt to improve his college recruitment.  As a result, he has picked up numerous offers from college programs quickly in the process.

Hollins moved to the state of Arizona from California, in an attempt to develop as a player and to improve his college recruitment.  Hillcrest has the nation's top talented prospect in the country currently, as DeAndre Ayton has emerged at the school and in the college program.  As a result, Hollins is quickly making friends with college coaches.  As a result, Hollins recently received an offer from Arizona State University and also received offers from such schools as Arizona, California, DePaul, Florida, Florida State, LSU, Virginia and Virgina Tech.

Since moving to the state of Arizona, Hollins has received loads of interest from many college programs, and now has the attention of many more high major schools for himself.  Hollins indicated previously that he likes four schools currently in his college recruitment.  LSU, Arizona, Cal and Florida State are each schools that Hollins currently likes, although he does not currently have a leader in his college recruitment.

Now attending Hillcrest Prep, Hollins will look to gain much more recruting interest this senior year, although it is still unclear as to whether he will make his college decision this fall or in the spring.  He has not indicated a leader for his services as of yet.

Hollins is a big-time talent, as he is a very athletic wing prospect with a nice feel for the game and an ability to play well above the rim.  He thrives in transition and makes plays most prospects cannot, as a resut of his high motor and athleticism. Hollins immediately has become one of the elite prospects at Hillcret Prep, and also in the country.  Currently rated as a Top 100 (ranked #92 by Scout Hoops) prospect nationally, Hollins is a capable Top 50 national prospect with a strong senior season, which I expect him to have.

I look for Hollins to gian much more interest this high school season, and become one of the hottest prospects in the country, as a result of the tremendous schedule that Hillcrest will play this fall.