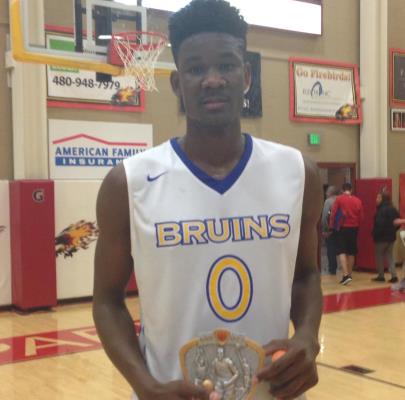 Who would have thought that a year ago we would no longer be talking about former Corona Del Sol superstar basketball prospect Marvin Bagley Jr. in Arizona, but instead, another superstar - Hillcrest Academy 7-foot-1 junior post DeAndre Ayton.

A year ago, it was thought that Bagley, who was building his national reputation on the club circuit, would return to Corona Del Sol and lead the Aztecs to a fifth consecutive Division-I state championship.  Now a year later, Bagley, the top overall prospect in America's 2018 class, and his family have moved to the state of California.  Instead, now Arizona basketball enthusiasts marvel at the attributes of another #1 national ranked prospect in America's 2017 class, DeAndre Ayton.

For a part of the 2015-2016 season, we had the opportunity to watch Ayton and Bagley play together - a sight to behold, as they and the Hillcrest team beat up on junior college and prep school competition.  While many national and regional scouts and media marveled at Hillcrest Academy's ability to land both future top-rated NBA prospects on the same roster, it has been even more impressive that Ayton has stayed at the program, and led Hillcrest to major national recognition among college coaches, scouts, media and other top-rated prep programs across the country.

This season, Ayton proved that he is a rare find in the high school ranks - anywhere on earth.  Honestly, we have never seen a player of his size and skill level, and with his ability to run the floor and make plays in the post or from the perimeter.  Ayton has developed as a player and person while at Hillcrest Academy this season, and after speaking with the Hillcrest staff, I am convinced that this young man will soon be in the NBA green room, and playing on ABC on the weekends in the near future.

"He has been terrific," said Hillcrest Academy program organizer Nick Weaver.  "You wouldn't believe how good a kid DeAndre is.  He just focus on all the things going on around him.  He just loves the game."

Ayton has been unreal this high school season.  He has had some monster games this season against top-rated national competition.  After a very impressive performance in his team's big win in the HoopHall West Tournament in January over #4 ranked Advanced Prep International (TX), 69-66, Ayton then went on to destroy his competition nationally the remainder of the season.  Ayton had highs of 50+ points on several occassions and grabbed 20+ rebounds also in numerous different games for Hillcrest.  And he is still only a junior.

As a result, every AAU/club program in American has been in hot pursuit of Ayton this season - looking to have him play for their respective teams in spring and summer competition.  Many people have offered the world to Ayton, with shoe giants Nike, Adidas and Under Armour each looking to have Ayton play for one of their heavily sponsored club programs.

This week, it was announced that Ayton has made his decision, and will play for the Nike-sponsored California Supreme (CA) club program this club season.  It had been rumored that Ayton was leaning toward's playing for Paul Pierce's new California-based club program, but in the end, Ayton mnade a different decision.  As a result of his decision, Nike will look to feature Ayton and his Cal Supreme team on the EYBL circuit.  You can already imagine what the immense crowds will look like this summer at the Peach Jam in Augusta, Georgia.  Get ready.

The best part of all this, is that Ayton is expected to return to Hillcrest Academy next season, and will team up with a new host of highly rated teammates next season.  We will announce some of the school's amazing additions for next season in the near future.  Stay tuned.

It is still unclear as to which school will land Ayton for college, or even if he will even attend college.  He could instead opt for a year overseas before entering the NBA draft in 2018.  Currently Ayton has indicated that he likes Kansas, Arizona, Kentucky and UCLA as future destinations for himself, although he indicates other schools have peaked his interest as well.

This season, according to Nick Weaver, more than 80 different division-I college coaches visited the Hillcrest Academy school's campus.  Next season, look for just as many visits to come from NBA scouts and general managers.  Ayton is the real deal and unlike anything we have ever seen.  Make sure to watch him as much as you can now, because very soon, there will be a price of admission to watch him and it will include an NBA ticket.