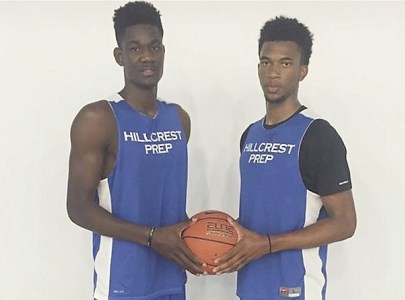 Hillcrest Prep was founded in 2012 and was one of the first initial prep basketball programs on the West Coast. Hillcrest has produced multiple high level prospects who have gone on to play at high-major Division-I college programs and in the NBA. As of late, Mike Foster was named a McDonald’s All-American and committed to play in the NBA’s G-League. It is not new territory for Hillcrest Prep, as other alumni had gone on to have illustrious careers, such as DeAndre Ayton of the Phoenix Suns (pictured left),  Marvin Bagley of the Sacramento Kings (pictured right) and Josh Green of the Dallas Mavericks.

Besides producing great basketball talent, Hillcrest Prep prides itself with preparing their student-athletes to become productive members of society. According to Program Director Nick Weaver, this past season his National Team had a team grade point average of 3.34. Besides performing well in the classroom and on the court, the Bruins have given back to the community on several projects.

Prior to the pandemic, Hillcrest Prep has done community outreach projects which includes feeding the homeless, clothing drives for the underprivileged, backpack and sneaker drives at the start of the school year and players reading to elementary students. This upcoming season, Weaver plans to continue the tradition of giving back to the community, as he and his organization are sponsoring the Indigenous National High School Basketball Championships on March 23-26, 2022 at Window Rock High School in Fort Defiance, AZ.

The accomplishments in helping the community are just the icing on the cake. Hillcrest Prep has an incredible track record and resume. Hillcrest is the first true ‘National Prep Program’ in Arizona by setting the standard and paving the way for other programs to start up. They were the first prep school to win a Grind Session National Championship.

Listed below are other individual accomplishments:

The past three years have been filled with accomplishments despite navigating through the COVID pandemic. Hillcrest alumni have signed contracts into the NBA G-League and signed letters of intent to big-time college programs in North Carolina, Arizona, Arizona State, DePaul, Texas A&M and two Ivy-League schools. In the upcoming draft, alums Kyree Walker and Makur Maker have declared for the NBA Draft.

Hillcrest Prep has a bright future rolling into next season. It is exciting to see the unveiling of next year’s roster later this summer. I am grateful to had the chance to sit down with Coach Nick Weaver to discuss all the great things going on at Hillcrest Prep.