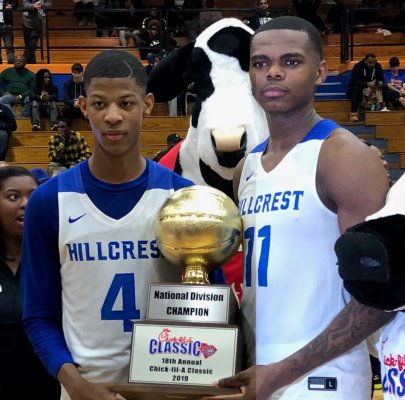 How sweet it is. It has been a rocky road over the past month for the Hillcrest Prep basketball program, but the immediate future and remainder of the season for Hillcrest is glaringly bright as the organization has made some changes and added some players. After tweaking things, after a slow start to the season, Hillcrest Prep is now completely on another level, and has won this year's very competitive and high profile Chick-Fil-A Classic in South Carolina.

The recent struggles of the Hillcrest Prep program were widely recognized and reported after a very slow start to the season, which included exhibition losses to Rancho Christian HS (CA) and Sierra Canyon HS (CA), and a blowout loss to Prolific Prep (CA) and another loss to Hamilton Heights Christian Academy (TN). But there is complete beauty in the struggle in basketball and life, and so the Hillcrest Prep program re-organized, made some changes and additions, and now have gone to another level, proven by their recent dominant performance in South Carolina.

After parting ways with Arizona basketball legend Mike Bibby as their head coach, the program brought in former Division-I college coach and Marquette all-time assist leader Tony Miller to coach the program. Miller helped lead the program to a very strong performance in New York's exciting Battle in the Apple event in Brooklyn, New York, which resulted in a very narrow defeat by Brewster Academy (78-76). In the loss, Hillcrest led the entire contest and looked very impressive, but failed to win.

Hillcrest then added one of the nation's elite overall talents last week, when 7-foot, 235-pound senior forward Makur Maker decided to transfer to the program immediately - leaving his program, CIBA at Pacific Academy (CA), in the middle of the Tarkanian Classic in Las Vegas (NV), and joining Hillcrest in South Carolina before the start to the Chick-Fil-A Classic in South Carolina. Maker was immediately inserted into the Hillcrest Prep lineup - giving Hillcrest the most dominant lineup of talent in America.

Without any true time to practice or prepare, the new designed Hillcrest Prep team entered the Chick-Fil-A Classic in front of loads of spectators, scouts and media with something to prove and against very stiff competition. Hillcrest would blow out Westtown (PA) in the first round of the event, 64-47, in exciting fashion. They would then defeat #5 ranked Huntington Prep (WV), 61-60, on a big three-pointer from the wing from Puff Johnson with :06 seconds left to play in the game.

On Monday evening, in an epic match-up, Hillcrest would then cruise to a huge 55-44 championship win over top-ranked La Lumiere High School (IN) - winning this year's Chick-Fil-A Classic. Hillcrest 6-foot-10 junior Michael Foster was selected as the Tournament Most Valuable Player for his continued strong play in the event.

Hillcrest Prep, who might have the toughest prep schedule in America, will now travel to Raleigh, North Carolina, to take part in another highly competitive event, the John Wall Holiday Invitational (December 29 - 30th).