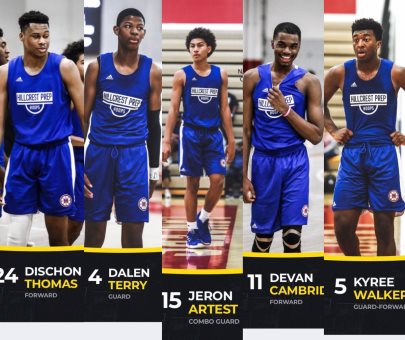 Recently, while other local high schools and prep programs are focusing on the up-and-coming high school basketball season in the state and abroad, Hillcrest Prep Academy decided to go international - taking a trip to China where they faced off with top-rated talent around the country.  Led by the terrific play of 6-foot-5, 205-pound junior guard Kyree Walker, who exploded on the tour - averaging more than 30+ points per/game and leading Hillcrest to a very successful visit.

On the trip, Hillcrest played against many different teams, including top-ranked Shanghai University - a game in which Kyree Walker absolutely went off and poured in a game-high 47 points in the win.  Walker also had 32, 30 and 25 points respectfully on the tour.  Walker is one of the most gifted and dominant talents in the country, and he proved it once again with his performance.

Walker recently decided to end his love affair with Arizona State University, as he chose to de-commit from the Sun Devils basketball program after committing as a freshman and remaining consistent in his commitment for two years.  Surprisingly enough, Walker chose to re-open his college recruitment recently - a move that shocked the country.  Now uncommitted once again, Walker is looking to land more college programs for his future.

The Hillcrest team is loaded this season, and also playing very well on the Tour were 6-foot-4 junior stud guard Dalen Terry, who did it all and stuffed the stat sheet.  6-foot-9 senior forward Dischon Thomas also played very well and was consistent in his performance.  6-foot-4 senior wing Devan Cambridge also was his usual self and gave Hillcrest another consistent scoring option.  The team also received strong play from 6-foot-4 senior guard Jeron Artest and sophomore guard Dimitrios Stragalinos.

Hillcrest would go undefeated on the trip and gained a lot of valuable international experience, which will help them a great deal this season against other top-rated prep competition.

This season Hillcrest has gone to another level, as the program has taken this trip to China, and also has new housing and vehicles for the team, to go with a huge Adidas shoe deal - the biggest of it's kind in the country.  This season will be very good one for a Hillcrest team that will look to build an identity this season, with loads of young talent and one of the elite prospects in the country.