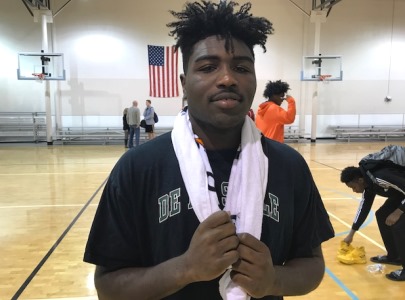 It was their second meeting of the season.  After their last contest where AZ Compass Prep would knock them off at home, this time AZ Compass would travel to Hillcrest Prep to face a talented post-graduate team that has had very good success this high school season.  Hillcrest's post-graduate group has knocked off several junior college opponents this season, and so they would be looking to make up for an earlier defeat this season to Compass.

The first half would see AZ Compass Prep turn the ball over consistently, and go very cold from the field.  In the second half, Compass Prep would look to get back into it behind the strong play from 6-foot-3 senior guard Dwayne Walker.  Consecutive three-pointers from Walker would get his team back to within 14 points, 49-35.  After an offensive rebound and put-back from 6-foot-7 junior post Takari Fields, Compass would narrow the lead to 11 points, 51-40, with 14:43 left to play in the contest.

After another three-pointer from Walker and a layup in transition by 6-foot-6 senior guard Both Gach, Compass would get to within 9 points, 56-47.  Compass would then narrow the lead to 8 points, after a mid-range jumper from 6-foot-2 sophomore guard Jalin Anderson.

Hillcrest Prep prep forward Zeke Quinlan is an absolute steal for Montana State University - signing with the school this fall.  Quinlan would throw down a monster, one-handed dunk after being fouled on the play over a defender.  Quinlan's dunk would be the momentum the Hillcrest team would need to close out the home victory, as they would eventually win the game, 92-82.

Emeka Udenya would finish with a team-high 22 points and 15 rebounds in the win for Hillcrest Prep.

Recruiting Notes:  Emeka Udenya is a skilled and talented wing prospect with excellent toughness and good overall versatility.  He advised me that he is currently hearing from Texas Rio Grande Valley and Metro State.  Udenya is a full academic qualifier, according to the Hillcrest Prep coaching staff . . .

Hillcrest Prep 6-foot-4 prep guard Joseph Lauri is a skilled shooting guard with good toughness and a nice perimeter shooting stroke.  Lauri is scheduled to take an official visit to the University of Denver this weekend, and could be nearing a commitment to the school . . .

Hillcrest Prep 6-foot-3 prep guard Austin Fadal is a bigger point guard prospect with a good overall feel for the game, and a solid overall skill level.  Fadal will be taking an official visit to Eastern Washington very soon, and also could be nearing a college decision.