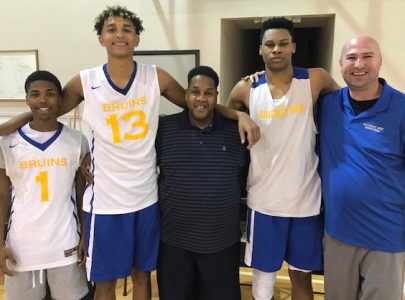 Hillcrest Prep Academy unveiled this year's Hillcrest Prep national and post-graduate teams on Tuesday evening at Precision High School.  Both teams would face each other in a scrimmage format, after a dunk contest kicked off the evening.

Kyree Walker looked his usual self in the contest, scoring when he wanted to and making plays down the stretch to lead his team to victory.  Walker is primed to have a big sophomore season for Hillcrest this year, and will headline a talented group of prospects.  Walker is currently rated by ESPN among the top 5 prospects in the 2020 class in America, and he looks to be set to have a huge year for the Hillcrest program.

KJ Hymes, fresh off a verbal commitment to the University of Nevada, has looked the strongest he has looked to date in his young career.  Hymes played very well on Tuesday evening, showcasing a much more productive style of play and finishing very strong at the rim.  Hymes is also set to have a big senior season for Hillcrest Prep, and will develop nicely into an absolute steal for the Nevada program.  Nevada associate head coach Johnny Jones was in attendance for the game to watch Hymes.

Dischon Thomas has really developed over the past year and is also primed to have a big junior season - a breakout year for himself.  Thomas came up big in the win on Tuesday evening, as he poured in close to 30 points in the victory.  Thomas ran the floor, finishing strong at the rim and also displayed a nice overall skill level, while rebounding strong and blocking/changing shots.

Jeron Artest has impressed me consistently each time I have seen him play as of late.  Artest knocked down a big 3-pointer late in the game to lead his team to the narrow victory.  Artest is a calm customer that plays with excellent poise.  He will be a major factor this season for the success of the Hillcrest program.

The post-graduate team had a strong performance on the evening, and were led by the strong play of 6-foot-3 prep guard Demarius Jacobs and recent Montana State commit, 6-foot-7 prep forward Zeke Quinlan.  Jacobs is a big-time athletic talent that makes plays with or without the basketball on the floor, and plays well above the rim in the open floor.  Jacobs is a highly sought after recruiting target currently, and will receive loads of recruiting interest this prep season.  Quinlan, while already committed to the Montana State program, will also have a strong season, and is a steal for the Big Sky Conference.  Both prospects will lead a talented group of post-graduates this season.

While the Hillcrest Prep program recently lost two top-rated prospects from their national team, the program still looks to be very strong this season and prepared to have another big year.