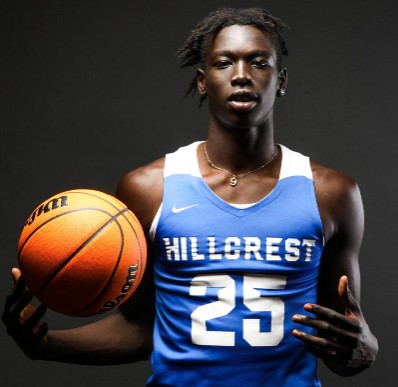 Hillcrest Prep has done it again - landing one of the nation's top overall prospects to their program. Hillcrest Prep has announced the addition of 6-foot-8 freshman wing Omaha Biliew, a native of West Des Moines, Iowa. Biliew is currently rated as the nation's top overall prospect in the 2023 Class, and will now team up with a loaded group at Hillcrest that includes 6-foot-8 junior forward Michael Foster and 6-foot-7 junior Keon Edwards (DePaul commit).

Biliew is a tremendous physical talent for a 2023 prospect, as he possesses excellent size, length and athleticism combined with a serious skill level that allows him to handle, score off the dribble and shoot the basketball with a nice overall skillset. He is able to play as a guard or as a wing with the basketball in his hands and also make plays for himself and others. Coming from Iowa, he has been well-coached and understands how to play and impact the game on both ends of the floor. He runs the floor extremely well and is an excellent finisher in the open floor.

The addition of Biliew next season to a Hillcrest roster that already includes Foster and Edwards in the frontcourt will be tremendous, once again, as Hillcrest is no stranger to landing elite-level talents. While landing Edwards and Foster (recently was selected as a Sports Illustrated First-Team All-American after a terrific performance this season) last summer, Hillcrest also previously landed suberb national talents such as Dalen Terry (University of Arizona), Kyree Walker (Chameleon BX), Josh Green (University of Arizona), Marvin Bagley (Sacramento Kings-NBA) and DeAndre Ayton (Phoenix Suns-NBA) in the past as well.

Joining Biliew next season as well, Hillcrest Prep also announced the addition of 6-foot-8 sophomore forward Rout Bijiek, also from West Des Moines, Iowa where he attended Dowling Catholic High School with Biliew. Bijiek is a bit raw offensively, but has excellent length of body and extreme upside as a player. He is an excellent shotblocker and runs the floor very well. A good finisher. Currently rated as a Top 100 prospect nationally in America's 2022 Class.

These two top-rated prospects will look to join an already talented group of performers to help keep Hillcrest Prep among the top overall prep programs in the country. Hillcrest Prep is coming off a strong season, where they won numerous tournaments, after a rocky start to the season and several coaching changes. The program will look to keep up their winning ways with many more additions to the program in the coming weeks/months.