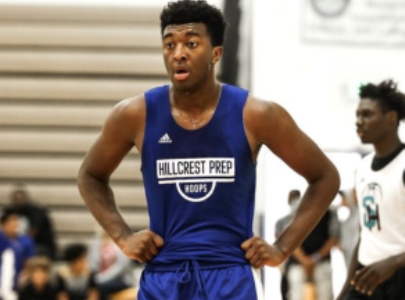 Hillcrest Prep has been in the news lately, after returning from a 10-day travel to China recently - a trip in which the team blew out their competition and gained loads of international playing experience.  The valuable experience gained from playing against strong competition across the world seemed to have made a major difference for the Hillcrest Prep South team, as they faced a very talented Prolific Prep (CA) team on Saturday night.  It was either that, overcoming jetlag from the trip or the fact that they lost their game on Friday evening against Balboa (CA), that allowed the team to propel ahead of Prolific Saturday evening, 61-59, in front of a nice crowd at Arizona Christian University.

The large crowd was electric on Saturday evening and included many top scouts and media in attendance, including Anthony Coleman (Arizona State), Bill Greer (University of Colorado) and Chris Crevalone (Grand Canyon).  The final game of the evening featured two of the top prep programs in the West.

In the game, superstar 6-foot-5 junior guard Kyree Walker played as good as we have seen him perform against top-rated competition.  Walker, who recently decided to re-open his college recruitment and de-commit from Arizona State University, looked like a young man on a mission, as he shot the basketball very well and exploded off the dribble to make plays for his team down the stretch to help lead the team to victory.  Walker will be one of the most sought after guard prospects in the country this season in preparation for a spring commitment.

6-foot-4 junior guard Dalen Terry has been on a tear since joining the Hillcrest Prep program, and he is playing his best basketball of his young career.  He looks to have also grown a couple inches since last season also.  He shot the basketball very well on Saturday evening and also finished strong at the basket, and in the open floor.  Terry came up big for his team down the stretch and looks to be one of the more sought after recruiting targets in the West this season.  Terry already possessing a large number of offers for himself, and that list will only continue to grow.

Hillcrest Prep 6-foot-5 senior wing Devan Cambridge, a native of Tennessee, is one of the most athletic performers in the country, and he proved it on Saturday, as he helped lead the team to the victory as a result of his defensive tenacity and pressure, and also several explosive tip-dunks over opposition in the game.  An unsigned prospect, Cambridge is worthy of serious college recruiting attention and should receive it as we go throughout the high school season, in preparation for the spring signing period.

Recent Bella Vista Prep transfer, 6-foot-6 senior forward Andre Harris came up big for Hillcrest Prep Saturday night.  Harris' tap in with just a second on the clock gave Hillcrest the victory over Prolific Saturday.  Harris also finished strong around the basket and gave Hillcrest Prep an inside presence in the contest.  A strong performance for Harris was just what he needed to help him with the transition to his new program.

In the earlier contest on the evening, Bella Vista Prep absolutely blew out Orangeville Prep (Canada) from start to finish in a low-scoring affair.  Bella Vista Prep took a 30-12 halftime lead in the contest behind terrific three-point shooting from 6-foot-4 senior guard Eman Sertovic.  Sertovic is one of the best pure shooters of the basketball around, and he couldn't miss on Saturday.  His shooting outburst blew the game wide open in the first half and Orangeville Prep never recovered as a result.

Bella Vista Prep 6-foot-7 junior Addison Patterson and 6-foot-4 junior guard Brandyn Talbot both played strong in Bella Vista's win, although it was a lackluster game for the most part.  University of Arizona signee Terry Armstrong played uninspired basketball on the evening, and rarely looked to be aggressive offensively and seemed to score only a couple field goals in the contest.