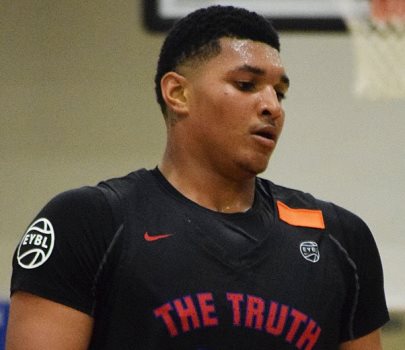 There has been so much going on in Arizona high school and prep basketball this season that it is almost impossible to keep up with everything taking taking place.  A major reason for so much news as of late has been the Hillcrest Prep basketball program, which has make consistent noise this fall with numerous acquisitions that the program has received to an already loaded prep program.

After recently adding other such top-rated prospects as Antwan January (University of Illinois signee) and Oscar Lopez (DePaul signee) to the program, last week the program announced the tremendous addition of 6-foot-10, 250-pound senior post Carl Lewis, one of the biggest and most talented post prospects in the country.

Lewis recently attended Lynwood High School in California, and put up very impressive numbers as a junior, averaging better than 20+ points and close to 20 rebounds per/game last season.  He is close friends with recent Hillcrest Prep transfer Oscar Lopez, so the addition of Lopez definitely helped in bringing along Lewis.

The addition of Lewis to an already ultra-loaded Hillcrest Prep roster will be very interesting this prep season, as the Hillcrest Prep program currently has two loaded teams - North and South.  This week, Hillcrest will take part in the Hoop Hall West event and I have been advised that only one of the Hillcrest Prep teams will be participating in the event, which will force the program to comprise one absolutely loaded group to face Denton Guyer High School (TX) on Saturday evening in the event.

Lewis is still uncommitted and should only see his recruitment begin to soar under the leadership of the hard-working Hillcrest Prep program, which often has college visitors to their program on a weekly basis.

Currently, Lewis possesses offers from Georgetown, USC and St. Johns, but he still has some work to do in the classroom to qualify academically for NCAA eligibility standards.  If he qualifies academically, look for Lewis' recruitment to explode this spring.

Lewis is an absolute handful as a college prospect, as he is among the biggest and strongest low-post prospects in the country - possessing long arms and very broad shoulders, with good low-post footwork and an ability to finish very strong around the rim.  He is an immediate contributor physically for the collegiate level, and he will be a problem for opposing prep programs this prep season.

I will continue to follow this story closely, and bring you any recruiting or performance updates on Lewis as they develop.

Arizona Hoop Review Scouting Report: A large post prospect with an excellent body and physical size.  One of the larger post prospects in America.  Recently transferred to Hillcrest Prep from Lynwood HS (CA).  A very good low post scorer with good low post footwork and excellent physical strength around the basket.  A strong finisher at the rim.  Has a good jump hook and gets to the free-throw line quite often.  An active rebounder and shot-blocker.  Runs the floor.  Has excellent potential on the floor, and if he can get it together off the floor then he will see a dramatic rise in his overall college recruitment.  An absolute load for opposing post players to keep off the glass.  A big-time low post prospect with potentially an excellent future.