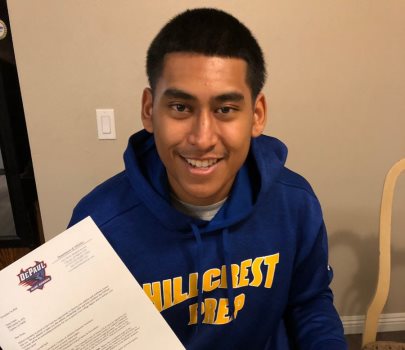 Lopez was a member of the Veritas Prep (CA) program early on this high school season, and he looked to be very happy with their program and head coach George Zedan.  Zedan reportedly had been very close with Lopez, so it comes as a major surprise that Lopez would change schools - especially after already committing verbally to DePaul.

Last week, Lopez signed a national letter of intent with DePaul and was seen in a photo reported by Hillcrest on Twitter in a Hillcrest Prep sweater - shocking basketball enthusiasts around the country.  The move to Hillcrest Prep has many people in the basketball media community scratching their heads.

Veritas Prep played this weekend in the Grind Session at Arizona Christian University without the services of Lopez, and also high-scoring senior guard Iverson Molinar (Mississippi State signee).  It has been rumored that Molinar could also be on the move from Veritas as well, but there is no clear indication at this time of whether there is any truth to Molinar leaving.

For Lopez, he will need to focus his attention on his academics for the remainder of the year to ensure that he qualifies academically for the collegiate ranks.  Hillcrest Prep has done a good job recently in helping their prospects achieve academic results, so the move to Hillcrest may be able to aid Lopez in that manner.

Lopez played with University of Arizona signees, superstar guard Nico Mannion and athletic phenom Josh Green this past spring and summer with Ryan Silver's West Coast Elite program.  Josh Green left the Hillcrest Prep program a year ago to transfer to IMG Academy in Florida, and played for Ryan Silver in the spring and summer.  Hillcrest Prep was very clear to me in the past that they were not happy with the situation, so the addition of Lopez, who also played for Silver, becomes even more interesting.

Either way, the very strong and athletically gifted guard prospect Lopez will be a tremendous addition to the Hillcrest Prep program, who recently returned from a 10-day trip in China - an amazing aspect of this year's Hillcrest program.  Lopez will provide serious scoring and depth to one of the Hillcrest Prep teams this season.  Hillcrest Prep currently has (3) different teams - a North team, South team and a post-graduate team.  It is still unclear as to which team Lopez will be on this season, but it would be very impressive to see Lopez line up next to gifted 6-foot-5 junior guard Dalen Terry and 6-foot-5 junior guard Kyree Walker, whom is playing his best basketball of his young career.

I will continue to follow this story closely and bring you any updates as they continue to develop.

Arizona Hoop Review Scouting Report:  Lopez is a strong and athletic guard prospect that is able to play both guard positions on the floor at a high level.  He is a strong athletic scorer of the basketball and is a strong finisher in the open floor and while slashing to the basket.  He has a nice feel for the game and also a scorer's mentality.  He pushes the basketball up the floor to the open man, and thrives in a wide-open floor game.  He is a good shooter of the basketball with unlimited range, and also has a strong mid-range game as well which allows him to get to the basket and convert high percentage shots.  He plays much bigger than his size suggests, as he is a strong rebounder and finisher over bigger defenders.  He is a very good ball handler and passer, and also makes players around him better.  He is also a very good defender that plays passing lanes and gets his hands on the ball quite often.  He also gets to the free-throw line quite often as well.  A very good prospect overall that is fundamentally sound and plays with a high level of confidence.  An immediate impact performer in the collegiate ranks.  Signed with DePaul.