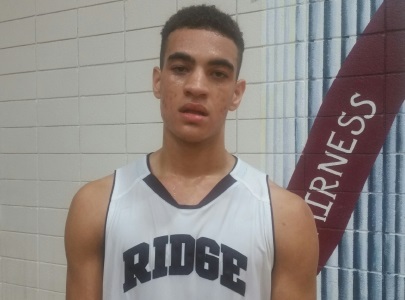 On October 13th on the campus of Phoenix College, Hillcrest Prep Academy’s post graduate and national teams played two games separately.  The 2nd game of the night was Hillcrest’s Post Graduate team vs. Eleate Prep out of Riverside, California.

It was a great night of basketball, and good to get a glimpse of each of these teams before the 2016-2017 basketball season starts here in just a few shorts weeks.

Of the games I personally saw, here are my notes/ observations of the top players:

2017 6-foot-5, 190-pounds Jay Green has a college ready frame right now from both of the guard positions.  He is really an explosive leaper and can really turn corners quickly when he is driving to the basket.  He has good vision/IQ from the point and is able to shoot it consistent from the wing.  Green holds an offer from Indiana University-Fort Wayne (IPFW) and Cleveland State and has interest coming in from many other schools as well.

2017 6-foot-11, 235-pounds C Jacob Tryon was very impressive in his game versus Hillcrest Prep’s post grad team.  Oozing with upside, Tryon runs the floor extremely well for someone his size and knows how to seal his man in the post (very mobile/good footwork in post as well).  He was actually able to drag out in some situations and hit 3’s from the top of the key as well.  He blocked some shots due to his length and is a prospect I will be keeping my eye on very closely this season.

2017 6-foot-4, 190-pounds SG/F Cahiem Brown is one of the toughest players that I have seen compete in a long time.  Originally from Coney Island, NY and from famous basketball powerhouse Lincoln HS, Brown is an extremely well built athlete (massive chest/very broad shoulders).  He is a consistent shooter from the 3-point line, but is more of an effective driver of the basketball at this point in time (can out muscle anyone in his way to score).  Brown has a good change of direction/speed in transition, throwing off defenders trying to guard him and usually leaving them not being able to stay in front of him.  He is also solid on the glass on both ends of the court and got some of his points of 2nd chance put backs, doing whatever it took to score the ball.  Brown also put down some of the best highlight reel dunks of the night in transition as well.  When Brown buys in, he also can really defender due to his never give up attitude he displayed during the game as well.

A one- time Cal commit, 2017 6-foot-4, 175-pound Alec Hickman is the best scorer on a loaded Team Eleate Prep team. He can really hit shots off of the bounce from 3, (Also catch/ shoot guy) and can snake by defenders and hit mid-range jumpers if left open as well. He has a great pull-up jumper that also works from 3/ mid- range and is able to get by defenders and finish thru contact at the basket as well. (Much more effective when he has ball in hand/ creates jumpshot from himself).   He is a long defender and can cover ground/ get his hand on balls quickly due to good reads on defense and can push the tempo after a steal, create for his teammates as well.