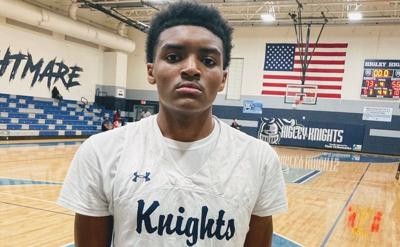 He is now gone almost as fast as he entered the state a little over a year ago. After a big sophomore season where he quickly became one of the hottest 2023 prospects in the West, Higley High School's gifted and athletic 6-foot-3 junior guard Chuck Bailey has decided to leave the state and head to a new prep program in Southern California. While many of the nation's elite prospects continue to join the elite prep programs in Arizona, Bailey will do the opposite, as he has decided to leave Higley and will finish his junior season at Donda Prep in Los Angeles, CA, a new prep program affiliated with rapper Kanya West.

Bailey was at the top of our rankings for the 2023 Class, previously rated among our Top 5 overall prospects in the class. He moved to the state of Arizona from the Mid-West. A native of Detroit, Michigan, immediately upon entering the state of Arizona, Bailey became one of the state's elite talents and college prospects.

Bailey is coming off a superb sophomore season for himself, where he was among the elite scorers in the 2023 Class in America. Bailey did all he could as a mere sophomore this season to keep his Higley team competitive. Bailey averaged eye-popping numbers this past season, 24.8 points, 6.1 rebounds and 3.1 assists per/game - ridiculous numbers for such a young prospect.

Bailey currently has offers from Kansas, Illinois, Ole Miss, UNLV, Loyola Marymount, New Mexico and Detroit Mercy, with many more college programs looking to line up with offers in the near future.

Bailey is a unique performer, as he has excellent size and length for a guard prospect with superb physical strength already as a young performer. He has nice length of body on a compact frame, as he has long arms and is able to make plays as a result. He is at his best as a 2/3, where he is able to create scoring opportunities for himself. He is also able to play the point guard positions at times within the game, but not for long stints. Bailey is a good shooter with range on his shot and also has a good mid-range game that allows him to make plays off the dribble, or score around the paint or in the lane, over and around defenders.

Bailey has the ability to become a very good playmaker and creator off the dribble as he matures, which makes him very difficult to defend for opposing guards. Bailey is also difficult to defend or slow down, as a result of his aggression and physical strength. He is a strong rebounder and has the ability to become an elite rebounder from the guard position. He is a solid defender, but I would like to continue to see him progress in this area over time, and focus much more defensively to maximize his potential as a player.

Bailey will be missed in Arizona high school basketball, and we wish him the best for his future.