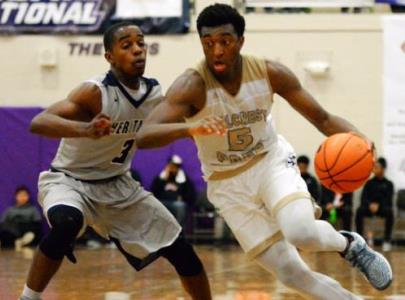 One of the elite prospects in America's 2020 Class of players resides right here in the state of Arizona at Hillcrest Prep Academy. This spring, 6-foot-5, 205-pound rising senior guard Kyree Walker has completed dominated his competition on the club circuit - proving just how elite and valuable a prospect he is. After an early commitment to the Arizona State Sun Devils as a freshman, Walker decided to re-open his college recruitment almost a year ago. Now wide open in his college recruitment, Walker has been on a tear.

Walker has traveled this spring with his club program, the heavily Adidas sponsored Dream Vision club program. While taking part in several events this spring, Walker has put on a show with his electric style of play, size, strength and overall experience and feel for the game. Many have questioned whether Walker would change classes and move up to the 2019 Class, like several Arizona prospects have before him. But it is still unclear as to whether or not that will happen.

Currently, Walker has a very long list of suitors that would love to have his services for the 2020 Class. Walker currently holds offers for himself from such schools as Kansas, Oregon, Florida, UCLA, Memphis, Arizona State, California, Texas, Arkansas, LSU, Nevada, Illinois, Oklahoma and Grand Canyon, just to name a few schools.

It is still unclear as to when Walker will make his college decision, or if he currently has a leader in his college recruitment. In the meantime, Walker is tearing up the club circuit and any opposition that attempts to slow him down. As a result, Walker is a household name nationally, and even internationally, as he made a tremendous name for himself in China last fall, when Hillcrest Prep toured the country for two weeks. On the trip, Hillcrest played against many different teams, including top-ranked Shanghai University - a game in which Kyree Walker absolutely went off and poured in a game-high 47 points in the win.  Walker also had 32, 30 and 25 points respectfully in games on the tour.

Walker will continue to pour in strong performances on the club circuit throughout the summer, and then will look to team up with co-2020 classmate, 6-foot-5 rising senior guard Dalen Terry again next high school season - giving Hillcrest Prep possibly the best backcourt in the country. The dynamic duo was very impressive this high school season together, and next season will be an absolute joy to watch again, even better.

Here is a highlight video of Kyree Walker while playing for the heavily Adidas-sponsored Dream Vision program this spring on the club circuit - proving his dominance against high school opposition.

Arizona Hoop Review Scouting Report:  Kyree Walker is a man among boys physically, and is considered among the nation's elite prospects and has been for some time.  Walker loves the game and plays with considerable passion whenever he steps on the floor. He is an absolute competitor that loves the game and enjoys competing at the highest level. Walker is among the elite overall prospects in America's 2020 Class - regarded by most as a Top-20 national prospect in the class.  Walker is a big-time talent that is physically very strong and has very good athleticism.  He has a nice handle of the basketball and a strong feel for the game, which allows him to make plays off the dribble and finish strong at the rim, while also being able to set up his teammates for scoring opportunities.  He is a good penetrator and a very strong finisher at the rim.  He has a good shooting stroke with range on his shot, and is able to make plays off the dribble to make plays for himself and others.  He is capable of making players around him better, as a result.  Very good in transition and in the open floor, and is a good slasher.  A good rebounder as a result of his sheer size from the guard position, although I would like to see him concentrate on this area of his game more.  A good one-on-one defender with good lateral quickness.  Has a very bright future ahead of him.