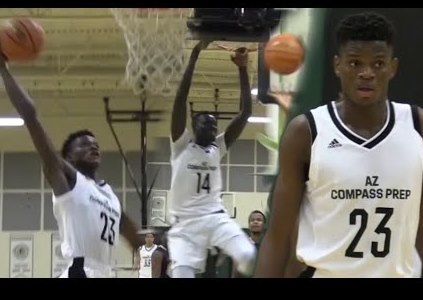 Superb freshman prospect, 6-foot-9 wing Sadraque Nganga, played a vital role on this year's AZ Compass Prep National Team, as he has immediately stepped in and proved that he is as good a prospect as there is in America's 2022 Class of prospects.  Nganaga is a very lengthy, rangy and skilled prospect with a very good feel for the game and an ability to make plays for himself and others.  He is a big-time future prospect that has budding young prospect written all over him.  He has a striking resemblance as a player early to that of current NBA top performer Rudy Gay.

To his credit, Nganga has received two scholarship offers already from Arizona State and Oklahoma, but his list will truly grow a great deal as more college programs learn about his advanced potential and skill-set.

Here is a highlight video of one of the nation's elite young prospects.