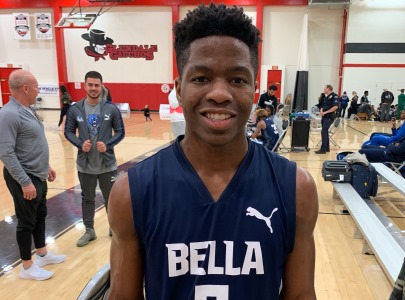 Grind Session National Champion Bella Vista Prep is absolutely loaded with top-rated talent, and has been for the past two seasons, since the program's origination in 2017 as a prep program.  But after having numerous different guard prospects play the point guard role over the past two seasons, the program entered the second half of their prep season still looking for a point guard to emerge to lead the program and raise the overall level of play of the Bella Vista team.

After the Hoop Hall event, and realizing that they would need to add another guard to their roster to raise the team's overall level of play, the program hit the jackpot, as they would add the services of stellar 5-foot-10 sophomore point guard prospect Zion Harmon, a 5-star national prospect for the nation's 2021 Class.  A native of Kentucky's Marshall County High School, Harmon decided to play for the Bella Vista Prep program, while still attending classes at Marshall County.

The impact of Harmon on the Bella Vista team was immediately evident at this year's Grind Session event at Glendale Community College in February.  In the event, and with loaded competition in participation, Harmon came up huge in the two games his team played.  He would help lead the team to wins over AZ Compass and also Hillcrest Prep North in the event.  He would look very confident and comfortable, as he poured in three-pointers from everywhere on the floor and from deep, got into the lane at will and finished plays around and over defenders, and also made players around him better.  Harmon had arrived just in time for the Bella Vista program.

And it was just in time, as Bella Vista would travel last week to Kentucky to take part in the Grind Session's National Tournament.  After helping lead his ball club to several victories in the event, Harmon would get an opportunity to lead Bella Vista in their rematch with the loaded Spire Academy program, led by senior guard Lamelo Ball and numerous other top-rated prospects.

In the highly anticipated rematch with Spire, Harmon would prove his tremendous value and worth as a point guard - operating the team at a high level in the game and leading the Bella Vista program to a huge 96-94 championship victory.  Harmon would finish the contest with a team-high 23 points, 9 rebounds and 6 assists and earn the game's Most Valuable Player honors.

It is still extremely early in the recruiting process for Harmon, so his recruitment will grow a great deal over the next year, especially after his superb championship performance from the weekend.

The future is very bright for Harmon and it will be very bright for the Bella Vista Prep program as well, since Harmon is just a mere sophomore and will have two more full seasons with the Arizona-based program.  He is the youngest prospect on this year's Bella Vista championship ball club, and will return next season with another nice class of prospects, led by junior wing Addison Patterson.

College coaches will need to get in line now for the services of this young man, as he is different.

Here is a highlight video of Harmon and the Bella Vista team this season, as he helped lead a serious team to a national championship on the Grind Session.

Arizona Hoop Review Scouting Report:  Harmon is an intriguing guard prospect with loads of talent in a smaller, compact frame.  He is is very skilled and complete offensively, and plays with superior confidence and command-presence on the basketball court.  He is a floor general on the floor that commands the basketball and controls the tempo of the game.  He is an excellent ball handler and passer that sees the floor, and loves to get his teammates involved.  Harmon pushes the basketball up the floor to the open man, and puts pressure on opposing defenses all game.  He is an excellent shooter of the basketball with unlimited range, as he is able to make shots from absolutely anywhere on the floor.  He actually loves to take shots from 30+ feet out at times, just to keep the defense honest.  Interesting enough, he makes them.  Harmon is a strong driver of the basketball and is a very strong finisher for his size, around and over defenders.  He thrives in the open floor.  A good rebounder for his size.  A very good defender that plays passing lanes and also has quick hands and feet.  A 5-star, pure point guard prospect that is currently rated among the top guard prospects in the country.