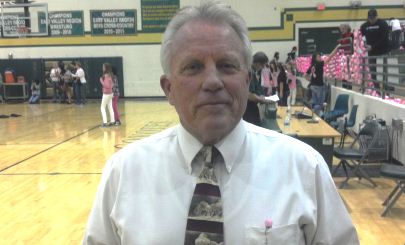 Highland High School's girl's basketball program is one of the winningest programs in the state of Arizona, and much of that has to do with the amazing legacy of long-time veteran head coach Miner Webster.

Webster earned his 700th win of his historic 25-year basketball career this week, after a big 44-21 blowout home victory over visiting Mesquite HS (12-10).  This season is Webster's 25th career of coaching and he has compiled an impressive overall record of 701 wins and 106 losses in his career.

Webster's 701st win of his career came Friday evening in another huge blowout of Skyline High School (3-16).  Highland would win the game 56 to 13, after building an amazing 37-5 lead after the first half of play.  After posting a 43-8 advantage with 3:57 left to play in the third period, Webster would pull out his starters and empty his bench for the remainder of the game.

"We weren't going to rub it in," said Webster after the game.  "After what Patrick (Dunn) is going through this season, it didn't make sense to do that."

Webster is a class act and is confident of his team's chances this season in the state playoffs.

"There are a lot of good teams out there like St. Mary's, but we will just work to continue to get better," said Webster.  "Games like this make it tough, but we will keep working."

This year's Highland team will be tough to beat once again in the post-season for the Division-I Class.  After losing in the state quarterfinals last season to Dobson HS at Wells Fargo Arena, this year's group will look to get much further - hoping to bring home the state title from defending champion St. Mary's High School when it is all said and done.