Highland Comes From Behind To Slow Down Dobson 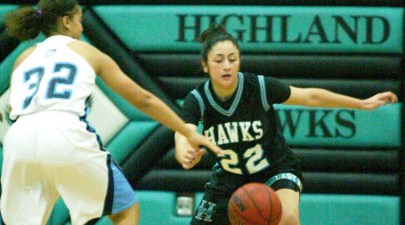 Both teams came into Wednesday's night exciting match-up on a major roll for the season, as Highland High School (26-2) had won their last 10 games in a row, and Dobson (20-5) had won 12 games in a row on the season.  With both teams among the very elite girl's programs in the state and both riding big win streaks, this game was set to be as exciting of a game as we have seen during the 2012-2013 season.  Both teams were also loaded with college prospects, so I had my popcorn ready for this match-up.

Highland High School was the host school for Wednesday's game, and the host Hawks would come out firing early and quickly in the first quarter.  After a quick basket in the paint by 6-foot-1 senior post Liz Rudd (Concordia College commit), a three-pointer by 5-foot-9 senior guard Olivia Lucero and another basket inside by 6-foot-3 senior post Megan Brown, Highland would jump out to a fast 7 to 2 lead in the game.

With Dobson looking to get a defensive stop, Highland's 5-foot-11 senior forward Rebecca Rudd (Concordia College commit) would knock down consecutive three-pointers to put her team ahead big, 13-2, with 3:57 left to play in the first period.

Dobson would finally stop the bleeding with 3:38 remaining in the opening period after a three-pointer from the corner from 5-foot-5 sophomore guard Dyesha Stahley.  Another three-pointer from Dobson's 5-foot-7 junior guard Caree Benford would make the score 16-8 in Highland's favor with :58 seconds left in the period.

But Highland would close out the period with another three-pointer from 5-foot-6 junior guard Mary Eckenrode - giving Highland a 21-10 lead after one.

In the second period, Dobson would come out in a full-court press and playing much more aggressive basketball defensively - applying serious ball pressure on the Highland ball handlers.  Dobson would look to turn things around and they would in a major way.

With 5:42 remaining in the second period, Dyesha Stahley would knock down another three-pointer to pull Dobson to within 6 points, 21 to 15.  Then a driving layup over a defender from 5-foot-8 junior guard Miyah Leith, and then an offensive rebound by 6-foot senior post Jamie LaVanway and an assist to Leith for another layup would pull Dobson to within 2-points, 21-19.  Dobson would then steal the inbounds pass and Leith would get fouled.  She would convert 1 of 2 free-throws to make the score 21 to 20, Highland.

With 2:52 left to play in the first half, Dobson would take their first lead of the game, 23-21, after a big crossover dribble to freeze her defender and a three-point shot by 5-foot-7 junior guard Tori Lloyd.

But Highland would finally stop their own bleeding, after a three-pointer from Olivia Lucero with 1:41 left in the first half.  After a turnover from Dobson, Highland's Megan Brown would knock down a long-range two-pointer at the buzzer to give her team a 26-23 halftime lead.

In the third period, Dobson would take the lead back quickly, 29-28, after consecutive assists in the open floor from talented 5-foot-8 senior guard Katherine Hamilton (University of San Diego signee) to her Dobson teammates for two transition layups.  Hamilton would then make her statement on the game, as she would score on a mid-range jumper, then score later on a floater in the lane after a Dobson steal, and then collect an offensive rebound on a missed shot in transition and get the offensive put-back to put Dobson ahead 38-32 with 3:05 left to play in the third quarter.

Highland head coach Miner Webster would call a timeout with his team struggling against Dobson's defensive pressure on the basketball.  After the timeout, Dobson would continue to force numerous turnovers by the Highland guards, but Highland's Lucero would make another big shot, a three-pointer in transition, to make the score 38-35 in Dobson's favor.  Then Highland's 5-foot-6 senior guard Kayla Miranda would convert a mid-range bank shot to pull Highland to within 2-points of Dobson - 39-37.

Katherine Hamilton would then get a big steal in the open floor and take the basketball the length of the floor - getting fouled on a layup attempt and finishing the play.  Hamilton's free-throw would give her the 3-point play and put Dobson ahead 41-37.

After two free-throws from Dobson's Stahley, Highland's Megan Brown would make a nice left-handed driving layup around her defender and would get fouled on the play.  Brown would also knock down the free-throw attempt - making the score 43-40, Dobson, after three quarters.

In the fourth period, with the score tied at 43 all and with Highland in the bonus early in the quarter, 6-foot junior post Melinda Myers would collect an offensive rebound and get an offensive put-back to put Highland ahead 45-43 with 5:38 left to play.  With 3:24 left in the game, Liz Rudd would knock down a big three-pointer from the wing, and then Kayla Miranda would get an uncontested layup down the floor after a baseball pass from a teammate to go ahead 50-43 with 2:39 left to play.

Dobson's Tori Lloyd would finish a driving layup, and then get a steal at mid-court and finish the layup in transition to bring Dobson from behind, 50-47, with 1:43 left to play.

While up by a narrow margin late in the game, Highland's Lucero would convert 3 of 4 free-throws down the stretch to give Highland the big 54-49 home victory.