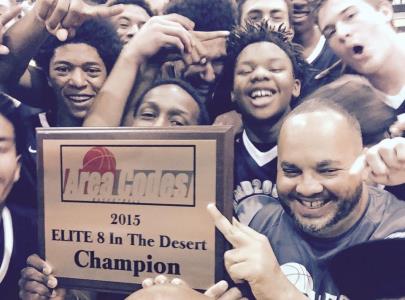 This weekend's Elite 8 In The Desert basketball tournament, which annually features many of the top teams in the state, was exciting again as Hard 2 Guard (CA) won it all.  Sponsored by former NBA player Marcus Banks and a Nike-sponsored team, Hard 2 Guard (H2G) defeated Amp'd Elite from Arizona in the championship game - 45-28.

Hard 2 Guard was led by the play of 6-foot-4 junior guard Channel Banks of Canyon Springs High School in the championship game, who was superb in leading his team to the victory with a nice shooting effort and strong drives to the basket.  H2G began the game with a 16-2 run on Amp'D Elite, who came out uninspired in the first half.

In the 16U Finals, Arizona Power North 16U squeaked past Danny Granger New Mexico (NM) en route to a championship win, 45-42.  Chaparral High School's 6-foot-1 sophomore guard Jalen Foster led the way for his team in the big win.  Foster pushed the basketball up the floor consistently and converted numerous baskets for his team - keeping pressure on the opposing guards.  Foster is definitely a player to watch for the future as he is developing prospect for a smaller college program.

Overall, the tournament was another success this weekend for tournament director Chad Groth.  Groth has consistently put on very good events in the state, and this annual tournament is one that I do not miss, as it features strong teams, exciting action and is well organized.