Hamilton Squeezes Past Marana MV, Advances To Next Round 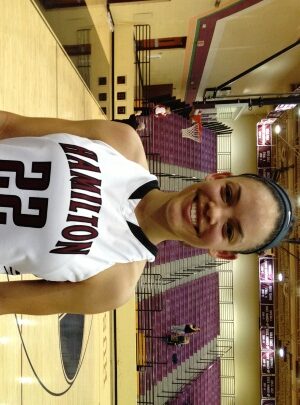 The game kicked off with Mountain View’s 6-foot-3 junior forward, Karina Kelly winning the tip off for her team, but traveling would be called under the basket - giving the Huskies a chance to score first.  Hamilton's 5-foot-9 junior forward, Ashlee Moore, would hit a three-pointer to score the first points of the game.  Back down the court, Kendall Adams (Idaho State signee), a 5-foot-10 senior guard/forward for the Huskies, is fouled as she goes up for a layup underneath - making one out of two free-throws for a 4 to 0 lead for the Huskies.

Mountain View 5-foot-8 senior guard Lauren Reece gets a pass from her teammate up the court and makes a layup to score the first points for her team.  Then, not long after, 5-foot-10 senior Jessica Salaz for Mountain View puts up a shot under the basket - bringing the game to a tie with 4:35 left in the first quarter.

Hamilton’s communication is off, as they begin to turn the ball over.  Salaz takes advantage, putting up another layup for her team bringing the score to 9-4, Mountain Lions.

Mountain View is patient and moves the ball well, but the Huskies continue to fight, looking to get their lead back.  A beautiful pass from Adams to Moore under the basket ties the game at 9 with a minute and a half left in the first quarter.  The Huskies play tough defense, keeping the Mountain Lions in the backcourt and forcing head coach Niki Melchiori to call a timeout to talk to her team with 1:22 left in the first quarter.

The second quarter starts with 5-foot-6 senior guard, Alexa Hogberg, going up under the basket to tie the game for the Huskies.

Ashlee Moore grabs a rebound under the basket for the Huskies, and puts it back up to get her team a 3-point lead - 11-14, Huskies.

Hamilton's Makayla Filiere, 5-foot-10 freshman forward, hustles down the court and gets a pass from Adams, which she takes for a jump shot from the corner, 11-17, Huskies.

Mountain View has yet to score in the second quarter, and with 4:09 remaining in the half.

Hamilton's Casey Rowden, a 5-foot-6 senior guard, intercepts a pass from the Mtn. Lions, and passes it to Hogberg who drives hard to the basket and scores two more points for her team.

Mountain View's Melody Mclaughlin, a 5-foot-6 senior guard, is fouled by Hamilton's Hogberg, but misses both her shots - still leaving her team scoreless in the quarter.

Reece is fouled by Rowden going up for a layup and she makes both her free-throws.  Rowden now has 3 fouls on her with 3:11 left in the half.  Later, Reece drives through a strong Huskies' defense to score two points for her team.

Hamilton's Aliyah Dickson, a 6-foot senior guard, puts up three shots; finally after grabbing her own rebound twice, makes her third shot.  Adams is later fouled by Hannah Boubion, a 5-foot-9 junior, while driving hard to the basket - making it her fourth time on the line so far in the game.  She makes both of her free-throws.

Huskies move the ball around a little, searching for a smart shot to take when Adams see’s the perfect opportunity and comes up with a three-pointer on the elbow of the key.  Then the Mountain Lions turn the ball over and Filiere makes a nice layup underneath.

Salaz then drives hard up the court to score the final points of the half for her team.  Hamilton is up 30-18 at the end of the first half.

The second half begins with the Mountain Lions in possession of the ball. Kelly grabs a rebound from a shot put up, and pushes it back up to score the first points of the quarter for her team.  Then Mclaughlin is denied while going up for a layup by Dickson for the Huskies and a foul is called.  She makes both her free-throws. A good start to a possible come-back for the Mountain Lions.

After the Huskies turn the ball over and Mclaughlin goes up for another layup, back-to-back layup’s for the Mountain Lions brings the score to a 26-30 score, Huskies.  Then Kelly passes through a couple Huskies to teammate Salaz under the basket for another two points for her team, 28-30, Huskies.  A Hamilton time-out is called with 5:10 left in the quarter.

Dickson is fouled by Mclaughlin for the Mountain Lions, as she drives hard to the basket. Dickson makes her first free-throw, but misses the second.  Adams grabs the rebound and puts up another two points on the board - trying to get more of a lead as the Mountain Lions started to fight back harder and harder as the game progressed.

Reece gets a pass from her teammate for a basket, bringing her team within one point of the Huskies.  Adams is called for a foul on Salaz for the Mountain Lions, her second foul of the game; Salaz makes one out of two of her shots - bringing this game to a tie at 36 with under two minutes left in the quarter.

Hogberg for the Huskies grabs a rebound, drives hard up court and makes a bounce-passes to Dickson under the basket to score two more points for their team - 36-38, Huskies.

Moore throws up a floater at the buzzer and it rattles in and out - making the score 36-38, Huskies, at the end of the quarter.

Adams passes the ball to Dickson under the basket to score the first points of the fourth quarter for her team.

Salaz for the Mountain Lions sneaks a shot up through some hands of the Huskies and scores two points for her team; 38-40, Huskies.

Adams gives a beautiful pass to Moore on her way to the basket, who puts up a soft layup to score two more points for her team.

Mountain Lions, playing a four-corner spread offense, see a chance to drive to the basket and Reece makes a layup underneath.  Then Dickson is fouled back underneath her own basket on a layup, and makes both her free-throws for the Huskies, score is 46 all.

With 1:04 left in regulation, the Huskies are playing harder defense than they have all game - not ready to be kicked out of the tournament and hoping to continue their journey on the road to state.

Moore is fouled going up for a layup, after she pushes the ball hard back up the court - making both of her free-throws and giving the Huskies a two-point lead with less than a minute left in the game.

Mclaughlin dribbles around a little before driving to the basket and bringing the game to a tie, again.

The Huskies have the ball as the clock dials down to zero, but a full timeout is called by the Mountain Lions with 3.7 seconds left in the game.  The Huskies cannot get their final shot in before the buzzer goes off, and this game heads into overtime.

Adams fouls Boubion, her fourth foul.  Boubion misses her free-throw, but Adams fouls Salaz taking her out of the game.  Moore then takes it coast-to-coast and scores two points for Hamilton.

Mclaughlin fouls out of the game when an offensive foul is called on her, her fifth and final foul of the game.

Hamilton's Hogberg and Moore double-team Red and cause a turn-over; Hogberg passes to Moore who makes the basket and is fouled.  After making her “and-one” shot, she brings the game to a tie at 54 all.

The Huskies bring the ball in from under Mountain View's basket, and Dickson drives hard up the court to put up a layup for her team - tying the game again. Dickson then gets back down the court and a foul is called on Salaz for a push on Dickson, putting her on the line.  Dickson misses her first free-throw and then her second free-throw rolls around the rim and eventually jumps out.

With 8.4 seconds remaining in the game, still tied at 56, the Mountain Lions have possession of the ball, but have to go the full-length of the court to score.  After three shots are unsuccessfully put up by the Mountain Lions, the buzzer goes off and our score remains 56-56.  Onto the second over-time we go!

The tip is won by the Mountain Lions for the third time tonight, and an offensive foul is called on Boubion, fouling her out of the game.  Moore takes the line, making both of her free-throws to get the Huskies a two-point lead.

Filiere has two blocks under the Mountain Lions' basket, denying them any points in this double-overtime game.

Hogberg passes to Dickson under the basket, making a beautiful layup to bring the score to 56-60.

The Mountain Lions would answer back though when Jamie Poreda, a 5-foot-6 junior guard, hit a jump shot to bring the game within two points of the Huskies.

The Huskies would dribble around, trying to run down the clock.  Dickson would turn the ball over, but Moore would recover by stealing the ball back for the Huskies.  Poreda would foul Whitmore, putting her on the line; Whitmore makes both her free-throws, 58-62, Huskies.

An inbound violation on the Mountain Lions' part would put the ball back in the Huskies hands for Moore to go up left-handed and score two more points for her team.  Hogberg is put on the line for the Huskies, making one of two of her free-throws.  Reece would then hit a three-pointer for her team, bringing the score to 61-65, Huskies.

Hogberg is put on the line with :07 seconds remaining in the game, making one of two of her free-throws again.  The final buzzer would go off and the Hamilton Huskies would advance to the next round of the Division-I State Tournament, with a final score of 66-61, a double-overtime victory.