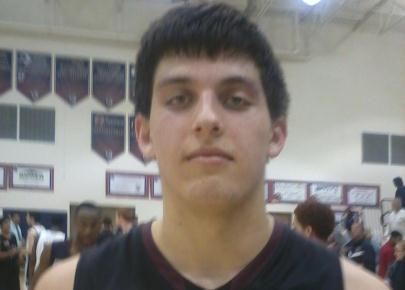 Perry HS 6-foot-6 junior forward Geoffrey Vredevoogd started the game off with a lay-up inside.  Then Hamilton 6-foot-1 senior guard Nate Walker made a jumper for a 2 to 2 tie game.

Perry 5-foot-11 freshman PG Bryce Fisher earned a surprise start and made the best of it, and he hit a three-pointer after a nice pass from 5-foot-10 senior PG Nathan Henderson. Walker then hit another jumper for a 5 to 4 Perry lead early on.  Henderson and Walker exchanged lay-ups for a 7 to 7 tie.  Then Hamilton 6-foot-7 sophomore post James Sosinski made a tough 2 points down low, and Evans slashed to the hoop for a lay-up for a 11 to 7 Hamilton lead.

Henderson then stole the ball and scored a lay-up to close it to an 11 to 9 Hamilton lead.

Perry 6-foot-4 junior forward Jake Mortenson then earned a trip to the line - cashing in and making both to tie it up at 11 with 2:30 left in the quarter.  That would be the last time in the game that it would be close for Perry.

The second quarter started and 5-foot-10 junior guard Jordan Howard had one thing in mind; time to score points.  He immediately stole the ball and took it down for a running lay-up.  After that play, Howard would score 9 of his team's next 15 points to give him 11 in the quarter, but Hamilton would unfortunately score 18 points for a 41 to 32 lead at the half.

Howard’s skills were on display in that stretch with making his free throws, blowing by his man, pulling up on a dime and scoring - showing off his range from deep.

The third period was more of the same for Hamilton, as they outscored Perry 14 to 6 - giving them a 55 to 38 lead after three quarters of play.  Very balanced scoring for the entire team for Hamilton.

The fourth quarter started and Sosinski made a real tough shot inside for 2 points.  Then Fisher would hit his second deep 3-point shot for a 57 to 41 Hamilton lead.

On the next possession, Hamilton proved why they will be a tough out in the playoffs, as they collected four offensive rebounds in a row, led by McCall with three of them and made a tip-in also.  They would outwork Perry, a common trait against everyone they play.  Every kid who steps on the court for the Huskies has the attitude that they will outwork their opponent.

Eventually, all the seniors would go in for senior night and with the game out of hand - leading to a final score of 68 to 50 for Hamilton.

Even though they didn’t make the playoffs, the future of the program looks bright as their sophomores and freshmen look very good - plus the arrival of star 8th grader and nationally ranked performer Marcus Howard should help them next year earn a playoff trip.

Hamilton had a very balanced attack with 10 players scoring, led by James Sosinski with 14 points, 6 rebounds and 3 blocks. Hamilton has five guards who can play, and also have five different big-men who know how to play.  They all know their roles for their team and form one of the deepest teams in the state.