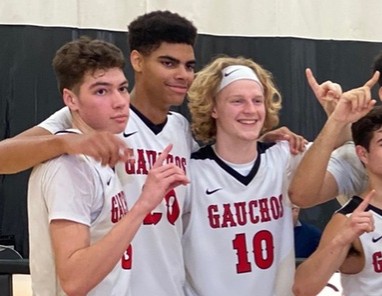 Glendale Junior College (GCC) is coming off a strong junior college season last year (2019-2020), after winning last year's ACCAC Conference Title. Unfortunately for Glendale JC, the NJCAA Division-II National Tournament would be cancelled due to the COVID-19 pandemic - ending Glendale's hopes and chances of a national championship, or even continuing their strong season. A major reason for GCC's strong season last year, was the strong play of 6-foot-8 rising sophomore forward Adam Hamilton. A graduate of Buckeye High School (2019), Hamilton is coming off a strong freshman campaign for himself, and now is one of the top returning prospects in the ACCAC.

Unfortunately for Hamilton (pictured middle), an opportunity to compete and gain maximum exposure to college coaches during the spring and summer NCAA Evaluation Period did not happen, due to the NCAA's cancellation of the periods, as a result of the growing COVID pandemic. Hamilton would have become one of the nation's hottest 2021 junior college prospects with an opportunity to showcase his talents in national JUCO exposure camps/events, but instead has flown well below the recruiting radar.

Currently, Hamilton is receiving strong recruiting interest from numerous mid-major programs in the West, and has several offers to his credit, but this young man is worthy of much higher college recruitment, and could be receiving much higher college recruitment, if he had the opportunity to be seen and evaluated against other top-rated juco prospects throughout the summer. With the start to the 2020-2021 ACCAC junior college season expected to begin in January (2021), Hamilton is definitely one prospect that should absolutely see his recruitment soar in the spring - making him one of the top juco prospects in the West.

Hamilton has really developed and grown physically in size, since his days at Buckeye High School, where he helped led the team to a very strong season in his senior year. Then, Hamilton was a developing low-post prospect with good size and length, that was still raw offensively and had tremendous upside. Currently, Hamilton has grown a great deal physically and has matured nicely into his lengthy frame. He is a stretch 4-man, that is able to play inside and out, and has a soft touch from the perimeter - able to stretch the defense and also score around the basket effectively. His extreme length of body for his 6-8 frame, allows him to rebound outside of his area and also finish plays strong around the basket. He is a very good finisher around the basket, and also has the skill-set now to step away from the basket and make shots. He also has very good footwork inside the post and from mid-range, making him a nice all-around offensive threat.

Hamilton is also a good overall athlete and runs the floor very well, and plays much bigger these days, as he has developed well into his frame and is now realizing his upside and potential for the future.

Last season as a freshman starter for Glendale Head Coach Ken Carrillo, Hamilton was impressive - averaging 9.5 points and 7 rebounds per/game, while shooting 51.3% from the field. He will definitely raise those numbers significantly as a sophomore starter for a Glendale program that is on the rise.

When the junior college season does pick up, Hamilton should become one of the hotter juco prospects in the West, and possibly the country, as he is an attractive looking prospect with size, length and a nice overall skill-set, to go with good athleticism and an improved understanding of the game, while playing for longtime former Division-I coach Ken Carrillo.

Look for Hamilton to raise eyebrows of many college coaches this junior college season, after missing out on a spring and summer that would have significantly raised his recruiting stock among the nation's top college programs.