Haines Coming Up Big For DV, Reeling In Interest 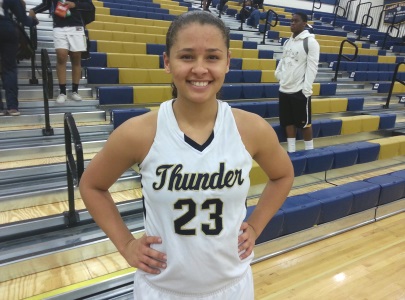 Desert Vista High School's girl's program has been one of the top girl's programs in the state for some time, but this season, after the addition of transfer junior guard Sabrina Haines to the program, the Thunder have completely rolled through the competition.

Desert Vista (25-1) is the state's top team this season in the Division-I Class, and any other class for that matter.  Led by talented head coach Jontar Coleman, the combination of a trio of division-I prospects for Desert Vista has been too much for opposing teams in the state.  5-foot-7 senior point guard Emily Wolph (Santa Clara signee), 6-foot-4 junior post Kristine Anigwe (Cal commit) and 5-foot-10 junior guard Sabrina Haines have each combined to lead the Thunder to a Top 25 national ranking this season.

The Thunder's only loss this season came late last month in a narrow, 44-46 defeat at Mesquite HS - a game in which Desert Vista struggled from the field.

Wolph is among the state's premier point guards, while Anigwe is the state's most dominant inside presence.  The addition this season of Haines to the Thunder program, has added a steady and tough guard presence for DV - combined with an ability to score off the dribble from the wing and also create scoring opportunities for others.  Haines is a fluid offensive threat with a nice offensive skillset and an excellent feel for the game.

Haines transferred to Desert Vista in the off-season last year, after leaving Mesa Mountain View HS, where she spent her first two high school seasons and started for the Toros in their backcourt.  The move by Haines was a result of her parents moving into the Desert Vista district.

Haines is a combo-guard prospect in high school, but her mother advised me recently that she will play the point guard position in college and enjoys playing the position a great deal.  Haines is also an excellent defender and takes pride on the defensive end of the floor.

Haines was selected as this year's Arizona Preps Fall Showcase Tournament Most Valuable Player, after a strong performance in the event.

Haines is garnering loads of division-I interest already as a junior, and has already received scholarship offers from such schools as Arizona State, UNLV, NAU and Grand Canyon.  She is also receiving strong interest from USC, Colorado and Oregon State, with offers beginning to pour in for the talented 2015 guard prospect.

Desert Vista has won 6 games in a row since their only loss of the season to Mesquite HS, and will finish off their regular season on Tuesday (2/11) at home against Tolleson HS.  Look for Desert Vista to then waltz through the state playoffs and win this year's Division-I state title.  If anyone is to beat this team again, it will be a formidable task come playoff time.