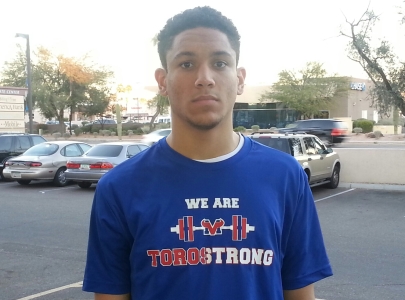 With the busy recruiting month of July quickly approaching us, college coaches will be focusing their attention primarily on the 2016 class of prospects in the West.

One of the better prospects in Arizona's 2016 class was a lesser known prospect before the spring evaluation period.  Casa Grande High School's 6-foot-4, 185-pound rising senior Greysn Rogers emerged this spring  with a solid performance, and now looks to be ready to attract some attention this summer.

Rogers is looking forward to having a strong summer for himself, especially after living in southern Arizona and seeing very few college coaches if any at his high school games.  Rogers will now have an opportunity this summer to raise some eyebrows for himself, and hopefully gain some serious recruiting interest from college programs.

Which level of college programs Rogers attracts will be very interesting, as he has a superb body with a very athletic frame.  He has good size for his body and is a strong prospect with a good overall motor.  He has a solid overall skill level and has good versatility as a player.  Rogers is a talented wing prospect with good overall athleticism and solid feel for the game.

A team player, Rogers likes to play in a team-concept and get others involved.  He does not force the action, but is a glue-guy of sorts.    Rogers is a solid shooter of the basketball, but at his best from mid-range and off the dribble.  He is an active rebounder and a hard-nosed defender.  He is a solid ball handler and passer.

Rogers is coming off a good junior season, and will look to raise his numbers next season as a senior under new head coach Gino Crump.  He has the potential to become a division-I prospect with a strong performance this summer, so I am looking forward to watching him compete this July.

Rogers will travel this summer with his Passion For Ball club program, coached by Justin Allen.  The team is talented and comprised of many of the state's top prospects, and Rogers was among the top performers on the team this spring.

Rogers is a very good kid with nice work ethic and will make the college program of his choice very proud.  What level of college may heavily depend on his performance in July.