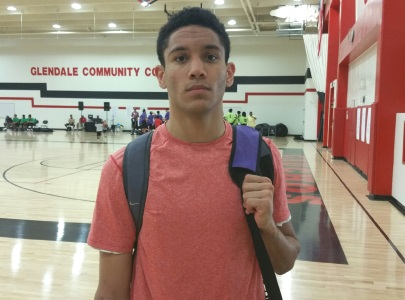 While it was not formally announced at this weekend's Arizona Preps Fall Showcase event, the most impressive performance from this weekend's event was turned in by Casa Grande High School's 6-foot-4, 185-pound senior guard Gresyn Rogers, as selected by our Arizona Preps staff.  Rogers really impressed scouts and media in attendance with his performance in this year's event - enough to earn Tournament Most Valuable Player honors.

One of the most under recruited prospects in Arizona's 2016 class, Rogers is still an uncommitted prospect in the class.  Rogers advised me that while he still has yet to earn any scholarship offers for himself, he is currently receiving strong interest from Dixie State University, a strong division-II program in Utah.  Look for Rogers' recruitment to pick up a great deal now.

One of the better overall prospects in Arizona's 2016 class, Rogers is coming off a very good performance for himself this past spring and summer on the AAU/club circuit.  Rogers competed for the Arizona Passion 4 Ball club program this club season.

Rogers has a superb body with a very athletic frame.  He has good size for his body and is a very strong prospect with a nice overall motor.  He has a very good overall skill level and has good versatility as a player.  Rogers is a talented wing prospect with excellent athleticism and a solid feel for the game.  A team player, Rogers likes to play in a team-concept and get others involved.  He does not force the action, but is a glue-guy of sorts.  Rogers has a very nice shooting stroke with range on his shot, and also has a very good mid-range game off the dribble.  He is an active rebounder and a hard-nosed defender.  He is also a good ball handler and passer.

Rogers is coming off a good junior season, and will look to raise his numbers a great deal this season as a senior under new head coach Gino Crump.

Rogers proved this weekend that he is definitely a division-I prospect, and is worthy of mid-major level college recruitment.

Rogers also was selected as this year's Tournament Slam-Dunk Champion in the event, after winning the slam-dunk contest in exciting fashion with numerous electrifying dunks infront of all the fans, media and participants of this weekend's event.

Rogers is a very good kid with nice work ethic and will make the college program of his choice very proud.  Congratulations to Rogers, his family and the Casa Grande community on this amazing accomplishment from this weekend's performance.