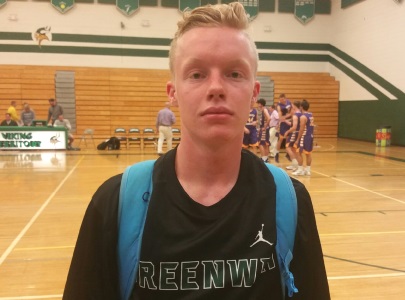 Greenway High School's Scotty Shaver is on a mission this summer in preparation for his final senior season.  The talented 6-foot-3, 170-pound rising senior point guard Scotty Shaver is among the top guards in Arizona's 2017 class and is ready to prove to the state just how good he is.

I watched Shaver perform last week in his team's first summer league games at Greenway High School, and was very impressed with this young man's toughness and basketball IQ.  Shaver is a hard-nosed guard prospect that plays to win and will do whatever it takes to lead his team to victory.  Shaver handles the basketball and makes plays for himself and others with excellent court vision, and he is able to blow past defenders, as needed, or shoot the basketball with excellent range on his shot.

Shaver has developed nicely at a very good pace and, after a very good junior season for himself and his Greenway team last season, Shaver is preparing himself for a big senior season - taking over the full-time leadership position for next year's Greenway team.  Shaver is proving it this spring already, while heading into the summer.  Shaver is being much more vocal this spring and realizes that he has to be the leader, on and off the floor, for next year's Greenway team for the Demons to be successful.

"I'm ready to have a big season," said Shaver.  "I have a lot to work on still to get where I want to be, so I'm just working hard on my game every day."

Shaver has his sights on playing college basketball in the fall of 2017, and so he understands that his performance this summer with his high school team, and also club program will be big in his abilityt oattract college coaches.

"I just want to prove that I can play with the best players in the state," said Shaver.

And Shaver will definitely continue to prove that he is among the state's best guard prospects, as he is coming off a strong performance on Tuesday in his team's summer league - scoring 24 points, 7 rebounds and 5 assists in his team's second win (2-0) of the summer league.

Greenway High School continues to be led by long-time terrific head coach Howard Mueller.  Mueller is as dedicated a high school coach as there is in the country, and he has coached Greenway for more than 30+ years.  Mueller has worked hard to develop Shaver over the past two seasons, and is excited that his talented guard prospect will be able to lead the Greenway program to numerous wins next high school season.  Mueller will also be aided next high school season by his assistant coach and former Iowa State star college guard Gary Thompkins.  Thompkins is the father of current Boston College rising sophomore guard Sammy Thompkins.

Last high school season, Shaver led the Greenway team in scoring and was the team's best three-point shooter.  Shaver also takes pride in defending the opposing team's best player, and accepts challenges on and off the floor, as he is a true leader for his teammates.