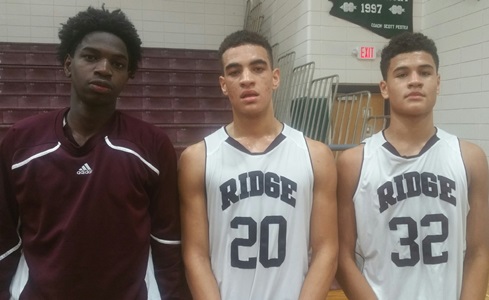 Mountain Ridge High School is as talented as any team in the state this high school season, as the team is led by four different division-I prospects.  On Thursday evening, three of the prospects combined to lead their team to a big home victory over a visiting Dobson HS, in what was one of the best high school games of the season.

Mountain Ridge (10-4) is as talented a team as the state has seen in some time.  Last high school season Corona Del Sol dominated the state with numerous division-I prospects - possibly the state's most talented team ever.  Before last season, the state had not seen teams as talented take floor since Deer Valley HS and Mesa Mountain View HS did during the 2005-2006 season.

Four different division-I prospects make up the Mountain Ridge team, led by the play of 6-foot-5 205-pound senior guard/forward Jay Green.  Green is among the state's best available unsigned prospects and is a big-time talent with excellent potential for the future.  6-foot-6 junior wing Saikou Gueye is a superb young talent that is developing nicely into a mid-major prospect, while 6-foot-7 junior wing Jared Rodriguez is another promising prospect that is beginning to come into his own.  The most gifted prospect of them  all is 6-foot-5 freshman guard Josh Green.  Green is the state's most talented and promising freshman prospect.

This group of gifted prospects have been very good this high school season - winning their first 6 games of the season.  An excellent start which included big wins over Mesa HS, Agua Fria, Highland, Chaparral, Perry and Hamilton HS.  Mountain Ridge would then enter the VisitMesa.com Basketball Challenge over the holiday break, only to lose 3 of the 4 games in the event to stiff competition.

Mountain Ridge would look to get back to their winning ways on Thursday evening, as they would host Dobson HS.  Dobson (8-4) is a talented team as well, and is led by four very good guards.  6-foot senior point guard Kendrick Williams is the catalyst for the Mustangs with his aggressive play, while 6-foot-1 senior guard Amaury Matthews shares the backcourt duties and provides good scoring depth.  6-foot-2 junior guard Da'Shawn Ray is a very good shooter with range, and 6-foot senior guard Camden Leith and 5-foot senior guard James Clark provide excellent shooting from the perimeter.

After the game would start, Mountain Ridge's Jared Rodriguez would suffer a concussion on a losse ball - causing him to miss the entire game.  After the injury, Dobson would get off to a very quick and big start after consecutive three-pointers from Kendrick Williams, and then two more three-point blasts from Da'Shawn Ray.

Dobson would jump out to a 12-0 lead, before the Green brothers would emerge.  A three-pointer from Jay Green and a floater from freshman Josh Green, would then set up a steal in the open floor from Josh Green.  The youngster would travel the length of the floor and finish a one-handed dunk just before the end to the first period.  Dobson would lead 16-13 after one quarter.

In the third period, Saikou Gueye would begin to get into a flow - slashing to the basket.  Consecutive driving baskets by Gueye with just over a minute left in the third period would pull Mountain Ridge to within a point of Dobson, 44-45.  Then a 30-foot three-pointer from Jay Green at the buzzer would give momentum to Mountain Ridge heading into the fourth period.

While the Mountain Lions were surging, Dobson continued to answer each time with a three-pointer to keep ahead in the game.

The final 3 minutes of the game would be awesome.  Back-to-back three-pointers by Camden Leith would put Dobson ahead 67-64, but then Josh and Jay Green would take over late.  A steal and a layup by Josh Green, a three-point play by Green and then a contested three-pointer by Jay Green would allow Mountain Ridge to pull away late - winning the game 80-72.

Josh Green would finish with a game high 29 points, while brother Jay Green would pour in 24 points.  Saikou Gueye would end the game with 13 points.  Dobson would be led by De'Shawn Ray's team-high 20 points, and 15 points from James Clark in the loss.

Mountain Ridge has the potential to win it all this high school season in the Division-I Class.  I will be keeping a close eye on this team the remainder of the high school season.  This could be our Division-I State Champion this season if they can put it all together when it counts.  They definitely have the talent.

Recruiting Notes:  Dobson HS 6-foot senior guard Kendrick Williams is one of the state's most talented sleeper guard prospects.  The unheralded point man has  superb handle of the basketball and a nice perimeter shooting stroke.  He has a strong, well-built body that allows him to take physical contact and finish strong in the lane.  He pushes the basketball up the floor and likes to find the open man - making his teammates better on the floor.  While he does have questionable shot selection at times, he is a gifted guard prospect that would be great for a smaller college program, or could become a much nicer prospect after a stint in the junior college ranks.  Definitely one to keep an eye on the remainder of the high school season.