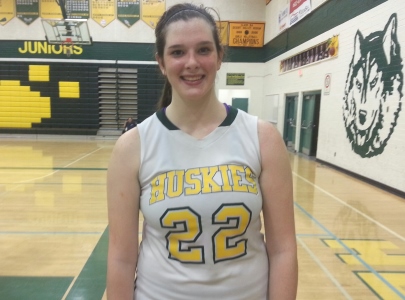 After recently receiving a scholarship offer from one of the nation's top women's basketball programs in the country, Horizon High School's 6-foot-4 senior post Katie Grant decided to end her college recruitment - giving a verbal pledge to a top-rated program from the MAAC Conference.

Rather than take her official recruiting visits this fall and think things over, Grant found her fit - giving a verbal commitment to Quinnipiac University and head Tricia Fabbri and her coaching staff.

Grant recently received a scholarship offer from Quinnipiac after a strong performance at a recent tournament she played in this summer.  The offer was her first.  After recieving that offer, she then also received another offer from UC Santa Barbara, but Grant chose to end her recruitment, rather than wait.

"She is really excited about her commitment and has developed a great relationship wit hthe coaching staff," said Katie's father Jeff Grant.  "It is a great academic fit for her too.  Quinnipiac has the #5 ranked physician assistant program in the country according to US News and World Report, and this is what Katie has chosen as her career field."

Grant is one of the top overall prospects in Arizona's 2016 class.  Very few post players in the state of Arizona or in the West, for that matter, have the size and potential of Grant.

Grant is coming off a strong summer for herself, while playing for her club program, the Arizona Select.  The team traveled all over the contry this spring and summer and included other top-rated girls prospects on the team, such as Lauryn Satterewhite, Kaitlyn Bickle and Taylor Chavez.

Very few post players around have Grant's combination of size and potential for the future, and I love this young lady's promise as a post prospect over time.  Congratulations to her and her family on this tremendous accomplishment for herself.  I expect Grant to only continue to improve over time, especially with the strong coaching and development that she will receive at the collegiate level.

Arizona Hoop Review Scouting Report:  Grant is one of the top overall prospects in Arizona's 2016 class.  Very few post players in the state of Arizona or in the West, for that matter, have the size and potential of Grant.  Often post players have the last laugh in the development process, as they develop at their own pace and take time to mature physically.  For Grant, her potential is becoming realized at a nice pace, as she is becoming a formidable post presence that college coaches are now taking notice of and will continue to observe very closely.  Grant is the force in the middle and a strong inside presence.  While Grant does not look to score much, she is very capable of doing so and has good low-post footwork, and a skilled left handed touch inside the paint.  She primarily is a rebounder and shot blocker that does both very well.  She keeps the ball up high on her rebounds and post moves inside, and is a solid finisher right now that will improve a great deal more over time.  Grant has the intangibles though as a post player and understands how to block shots and keep the ball in play, allowing her to help ignite her team’s fast break.  She is as strong a developing inside presence as there is in the state, and has the ability over the next year to develop into something similar to Kristine Anigwe in the paint for opposing teams.