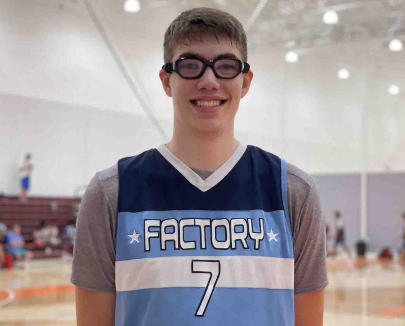 The Grand Canyon University basketball program continues to definitely be on the rise, after winning their conference title last season and advancing to the NCAA Men's Basketball Tournament. The program has not slowed down after last season's successful season, and now is focusing on the future of their basketball program and college recruiting. With recruiting in mind, the program has received a big commitment from one of the top overall 2023 prospects in the West - Estrella Foothills High School's promising 7-foot junior post Noah Amenhauser.

Amenhauser is currently ranked as our #5 overall prospect in Arizona's 2023 Class, and the class is absolutely loaded with gifted prospects. He has the potential to be ranked higher over time, as he continues to mature over the next two high school seasons, as he possesses tremendous size and has upside for a post player. While the 2023 Class is absolutely loaded with talent, Amenhauser is the best true big in the class (previous rankings), and has as much upside as any other prospect in the class.

The Grand Canyon staff did an excellent job in landing Amenhauser this early in the recruiting process, as he would have received loads more of attention in the recruiting process over time. A high-major Division-I prospect, Amenhauser's recruitment was a little slow for such a gifted prospect, as he only possessed one offer from UC-Santa Barbara before his commitment. Very surprising. The Grand Canyon University men's basketball staff is to be commended on this recruitment of Amenhauser, as they had the foresight to land him before other college programs figured it out.

Amenhauser is a rare 7-foot post in the state and in the West, especially for the 2023 Class. He is a large post prospect with a lot of potential for the future, and loads of upside, as he is still growing a great deal. Amenhauser is one prospect that could move up in the these rankings over time, especially since there are not many posts around with his combination of size and ability to run the floor and finish. Our staff really like's this young man's potential and ability to develop, and, while he is not ranked among the top (3) overall prospects in the class, this young man still has the ability to be projected as a high major prospect over time, regardless of his commitment.

Amenhauser is coming off a strong spring and summer showing while playing for legendary club coach Kenny Mullins and his Factory program. Amenhauser played for the Factory's 16U team throughout the summer, and was dominant in his play - proving that he would set up nicely to have a tremendous spring and summer in 2022. Amenhauser averaged modest numbers as a sophomore - posting 10.4 points and 6.2 rebounds per/game. He will definitely post much bigger numbers during his junior season, while looking to lead his program to a strong season in the state's 4A Division.

Congratulations to Amenhauser and his family on this tremendous accomplishment, as well as Kenny Mullins and the Estrella Foothills basketball program. This young man has a very bright future ahead of him, and he will anchor the middle for the GCU basketball program's future.