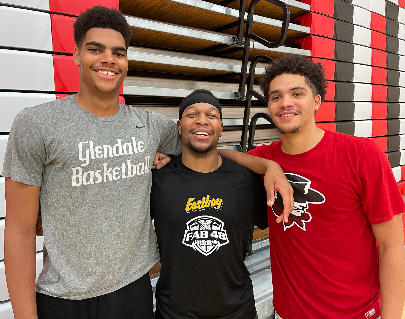 Glendale Junior College is back this junior college season to compete for another Division-II title in the Arizona Community College Athletic Conference (ACCAC), and have retooled with numerous new prospects since the 2019-2020 junior college season, after sitting out the season last year due to the COVID pandemic. Glendale JC won the D-II Conference title in 2020, before the season ended due to COVID. I have observed the Glendale JC program several times this season, and here are the top overall prospects thus far that have stood out to me.

Glendale JC's top overall prospect, and the top returning overall prospect in the ACCAC. Hamilton is a rare find for his size, as he can play inside and out and has a large and lengthy frame, which allows him to block and change shots, and also finish strong around the paint. He runs the floor like a guard and has excellent versatility as a player. While he needs to gain more consistency on his shot from longer ranges, Hamilton has a nice mid-range jump shot, and is also able to put the ball on the floor and make aggressive plays at the rim and around the paint. He is currently a stretch 4-man, that will be able to develop as a 3/4 over time, with more maturity and development as a player. His upside is glaring and he is also a fine young man with an excellent approach to the game, and a fine personality. He will make a Division-I college program proud and should be able to make an immediate impact, as he has been out of high school for almost (3) years, while still only being 19 years of age. Hamilton is a serious juco prospect that will have college programs intrigued, once they see him perform. Seldom do you see a juco prospect that has improved as much as Hamilton has during his tenure at Glendale JC. He has grown significantly mentally and, of course, physically, and now is a top-rated juco prospect that will benefit a great deal from his development. The experience gained by Hamilton through being coached by a former Division-I coach daily, winning a Region Championship, and playing considerable minutes against top juco competition will be invaluable in his pursuit to play at the next level, and even further over time. It will also allow him to make a strong transition to the Division-I level. One of the most underrated and under recruited juco prospects in the country currently.

Butler is a fundamentally sound basketball prospect with a nice overall feel for the game, and a pure shooting stroke with excellent range on his shot. He has a quick release on his shot and is able to get his shot off nicely, while also being able to set up his teammates quite well off the dribble. Can be a specialist as a shooter. Has good physical size for a shooting guard. A very good ball handler and passer that has good versatility for this Glendale team. A good rebounder at his size and position. Has a nice skill level. A good defender with quick hands. Has good lateral quickness and can defend several perimeter positions on the floor. Pushes the ball up the floor. A good scorer in transition. A very underrated guard prospect that will have a big season in the ACCAC.

A compact PG prospect that is strong physically and is a lock-down defender. A bull. Floor general that likes to get his teammates involved. Vocal leader. A good shooter with range, but values the pass more than the shot. A very good ball handler and passer. Sees the floor and does not turn the ball over. A strong rebounder for his size. A strong driver and finisher. Has a great attitude.

A strong, well built 3/4 prospect with a live body and good activity around the basket. Capable of stepping outside to the perimeter offensively, but at his best from mid-range and around the basket. Capable three-point shooter. Can play inside and out. Strong, athletic rebounder and finisher. Can defend several positions on the floor. OK ball handler and passer. Has some upside.

A very athletic guard prospect with good length of body and a very good overall offensive skillset. A good shooter that has range on his shot and can stretch the defense. Can be a scorer also. Has a good mid-range game. A good driver of the basketball and finisher. A very good ball handler - capable of playing both guard positions. A good passer. An excellent one-on-one defender with quick hands and feet, and plays passing lanes. An active rebounder. Good looking freshman guard prospect.

A skilled shooter with excellent range and a quick release on his shot. Can play both guard positions on the floor and defend both guard positions. Has a scorer's mentality and is a strong shooter of the basketball. Fundamentally sound. A good ball handler and passer. Left hander. A very good defender that plays passing lanes. Plays with poise.