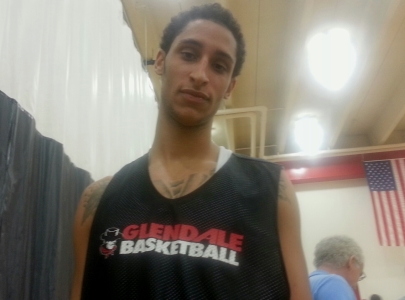 One of the top overall junior college prospects still available this spring is Glendale Junior College's 6-foot-9, 215-pound sophomore post Jordan Didier.  A division-I transfer from Texas A&M Corpus Christie this past season, Didier proved to be a consistent double-double performer down the stretch for Glendale JC head coach Damin Lopez this season.  Still available late this spring, Didier is a nice recruiting target for a college program in search of immediate production from the four position.

Didier's best asset as a low-post prospect is his tremendous versatility as a face-up four-man, and a nice ability to stretch the defense out to three-point distance.  Didier also proved this season that he can score in a variety of ways around the basket - utilizing a good jump hook and up-and-under moves inside to keep his defender off balance.

Didier would average 13.2 points and 7.8 rebounds per/game this season for Glendale JC, and providing a consistent low-post threat for the Gauchos for much of the season.

Didier would play as a freshman for the division-I program, before red-shirting last season in his second year at the school.  After sitting out what would have been his sophomore season, Didier landed at GCC where he played this season as a red-shirt sophomore.

Didier is looking to make his college decision very soon and is hopeful to land a decision before the end of the month.

I will continue to follow the college recruitment of Didier closely this month, and bring you any updates as they continue to develop.

Arizona Hoop Review Scouting Report: While Didier stands 6-foot-9, 215-pounds, he is capable of playing both forward spots on the floor.  Didier is a very versatile low post performer that has good skillsets on the perimeter, capable of stepping outside and shooting the basketball from 15-18 feet with consistency.  He possesses a very soft touch from the outside, and is even capable of putting the ball on the floor and getting to the basket as well.  He also has developed a good low-post game with excellent footwork and a nice jump hook, with several up-and-under moves.  Didier is solid defensively although he needs continued focus in this area.  Didier could become a force, as he has a very long and rangy of body.  He has good lateral quickness for his size and has become a strong offensive rebounder and a capable shotblocker, although he needs to continue to focus on this area of his game to maximize his potential as a prospect.  He has struggled defending bigger, stronger players in the low post, so toughness will be a key factor in his college recruitment.  Didier’s best attribute though is his tremendous personality and basketball IQ.  A very mature young man, Didier speaks very well, and carries himself in a mature manner.  Needs focus on the basketball court to reach his full potential.  Has some upside.